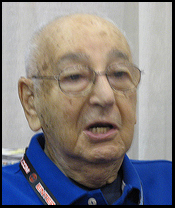 One of the last of the founding fathers of comic books, writer/editor/artist/publisher Joe Simon, died yesterday at the age of 98.

Joe was the first editor at Marvel Comics, then called Timely Comics. After creating Captain America with artist Jack Kirby, the team moved over to DC Comics to create the Guardian and the Newsboy Legion, the Boy Commandos, and Manhunter and take over the Sandman feature. The “Simon and Kirby” team were the first to receive regular cover credit. In the past several years, both Marvel and DC has reprinted all of this material in hardcover.

After World War II, the team reunited to form their own comics imprints, Prize Comics and Mainline Publications. In those endeavors they created the romance comic (Young Romance) and published titles including Boys’ Ranch, Black Magic, Bullseye, Foxhole, In Love, Police Trap and Young Love. They also created what at first was a knock-off of their own Captain America titled Fighting American. By the end of the first issue, Fighting American became a straight-forward yet satirical series lampooning the excesses of the anti-Communist hysteria at the time.

Their final creative collaborations occurred after the team formally split up following the dissolving of their imprints: they created The Adventures of the Fly and The Double Life of Private Strong (a.k.a. The Shield) for Archie Comics at the end of the 1950s, which was another knock-off of their Captain America, complete with military theme.

On his own, Joe Simon did an enormous amount of work for his friend Al Harvey and Harvey Comics, including covers to many of their newspaper reprint titles such as Dick Tracy and co-creating their short-lived mid-60s superhero line. More significant, in 1960 Joe created one of the few successful Mad Magazine imitations, Sick. It differed from most of the many, many competitors of the era in that Sick was both well-drawn and actually funny.

Returning to DC Comics at the end of the 1960s, he created and edited Prez, Brother Power the Geek, Outsiders, and The Green Team, and reunited with Jack Kirby for a one-shot featuring their take on Sandman.

His autobiography, [[[Joe Simon: My Life in Comics]]], was published earlier this year by Titan Books. Preceding that was a personal history of comics, [[[The Comic Book Makers]]], was co-written with his son Jim.

Joe was the recipient of the Inkpot Award in 1998 and the Will Eisner Comic Book Hall of Fame award the following year.

Joe Simon was one of a handful of creators without whom the American comic book field would not be as we know it today. To say he will be greatly missed would be to overstate the obvious.