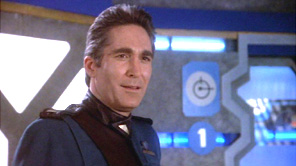 J. Michael Straczynski posted earlier today on Facebook that Babylon 5 star Michael O’Hare has died at the age of 60.

I regret that I must convey the sad news that Michael O’Hare passed away today. He suffered a heart attack on Sunday and was in a coma until his passing this afternoon. This is a terrible loss for all B5 fans and everyone involved with the show wishes to convey their condolences to the O’Hare family. He was an amazing man.

Michael O’Hare was born in Chicago, Illinois. He attended Harvard University, majoring in English literature, and studied at the prestigious Juilliard School of Drama, as well as with Sanford Meisner. He appeared in a number of theatrical productions on Broadway and in the New York area, including an acclaimed revival of Shaw’s Man and Superman with Philip Bosco and originating the role of Col. Jessup in the original stage version of A Few Good Men (the role played by Jack Nicholson in the film version) He was the first white actor nominated by the black theater community of New York for the AUDELCO Award for the Best Actor for his performance in the play Shades of Brown which examined the effects of apartheid in South Africa.

In 1992, he was cast in Babylon 5 in the lead role of Commander Jeffrey Sinclair. O’Hare remained with the series for the first season, and came back for appearances in the second and third season. He had various appearances in other TV shows, from Law & Order to The Trial Of The Incredible Hulk.

I had a few conversations with Michael over the years, though I hadn’t seen him in almost half a decade. He was a kind and gentle man, and much funnier than his roles would have made you think. And his voice makes for one of the best intros to a science fiction series ever: