DENNIS O’NEIL: Do You Believe In Magic?

Here it is Tuesday evening and we’re still debating. Should we go to the 11:59 showing of the new Harry Potter flick at the local 21-plex or catch one of the early showings in the morning?  Pros and cons on both sides.  But we will see the movie within the next 24 hours; count on it.

Although I’ve enjoyed the previous films, I can’t call myself a Potter fan.  I haven’t read any of J.K. Rowling’s novels, though I love Ms Rowling’s bio: single mom writing in a café becomes hugely successful author, celebrity, and megamillionaire within about a decade, without becoming a robber baroness.  But Marifran’s read the books.  Oh yes indeed.  And so have daughters Meg and Beth.  So I’m pretty up on the Hogwarts scene and when the final volume in the series arrives in a couple of weeks, I expect my conversations with my wife to be conducted in monosyllables until she reaches the last page and learns Harry’s fate.

I’m surprised that these things are so popular, as I was surprised at the resurgence of interest in J.R.R. Tolkein’s Lord of the Rings saga and the huge success of the movies made from Tolkein’s trilogy. The reason is, I thought we were past believing in magic.

Oh, sure, you don’t have to actually believe in something to enjoy stories about it.  But we do have to be able to accept it on some level. It helps the willing suspension of disbelief your English teacher told you is necessary to the enjoyment of fiction if you can allow that what you’re being told about exists, or could exist, or at least might have existed. Hero stories are about as old as civilization, and the tale-tellers always supply a reason why their protagonists have extraordinary powers.  In classic Greece, for example, and later in Rome, superpowers were explained by their possessors either being gods, or half-gods, or children of gods, or gods’ special pals.  Then plain ol’ magic, origin unknown, was used to rationalize superhuman feats in folk tales like those in A Thousand and One Nights.

By the time Jerry Siegel created Superman in 1934, not many Americans believed in magic, but science … ah, science was another story, the hope of nations, the new panacea.  So Jerry gave his good guy’s powers a (sort of) scientific rationale.  Didn’t have to be real science, and anyway, who really understood real science?  But almost everyone knew it existed, and that was good enough for pulp fiction. 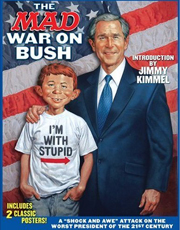 Now, we’re back to magic, which we really don’t believe exists.  Or do we?  I can’t help wondering if there’s a connection between the resurgence of make-believe necromancy and the resurgence of that ole time religion.  We’ve been hearing about “faith-based” programs for quite a few years, and a lot of us seem to be welcoming them. Men of science have gotten short shrift in halls of government where men of faith are welcomed. Is our fantasy reflecting the return to an earlier form of religion in the real world?  I don’ mean to imply that magic and faith are identical.  They’re not.  They’re not even first cousins. But in bad light some folk might mistake one for the other.

I don’t know, and I don’t have any vested interest in any particular answer.  But I do think it’s a pretty nifty question.

RECOMMENDED READING: The Mad War on Bush, by the Usual Gang of Idiots.  Painful truth in cartoon form.