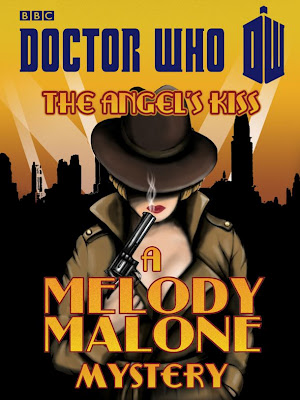 Coming soon from BBC Books is a new Doctor Who tie-in e-book entitled The Angel’s Kiss: A Melody Malone Mystery featuring a very pulp-inspired cover. The cover also appears in The Angels Take Manhattan episode of Doctor Who, airing September 29 on BBC and BBC America.

BBC Books are to release a special book inspired by this weekend’s episode, The Angels Take Manhattan. The Angel’s Kiss is a 112-page novella written by Justin Richards, and is the first book in the range to be published that has been written from the perspective of one of the show’s characters.

Melody Malone not only runs her own agency, she also happens to be the author of a successful series of novels, featuring one Melody Malone.

The book will only be available electronically beginning October 4th, a few days after the episode’s premiere.

On some days, New York is one of the most beautiful places on Earth.

This was one of the other days…

Melody Malone, owner and sole employee of the Angel Detective Agency, has an unexpected caller. It’s movie star Rock Railton, and he thinks someone is out to kill him. When he mentions the ‘kiss of the Angel’, she takes the case. Angels are Melody’s business…

At the press party for Railton’s latest movie, studio owner Max Kliener invites Melody to the film set of their next blockbuster. He’s obviously spotted her potential, and Melody is flattered when Kliener asks her to become a star. But the cost of fame, she’ll soon discover, is greater than anyone could possibly imagine.

Will Melody be able to escape Kliener’s dastardly plan – before the Angels take Manhattan?

The e-book will be released October 4, 2012 via digital stores.