Michael Davis: Be Careful What You Wish For… If You Suck 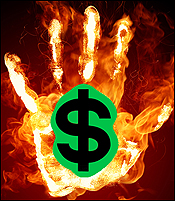 Ever see a movie or read a comic book that just sucked? Ever wonder how that god-awful piece of shit came to see the light of day?

I vowed never to make that mistake again, which is why all my current projects are at least two years in the making. I just signed a deal to write another novel and my first novel has yet to come out. I could write any book in three months but I’m smart enough (now) to take the long road when it comes to content. My latest book deal calls for me to deliver the first draft in a year. Do I need a year? Nope. Will I take the year? Yep.

Some creative people do as much as they can as fast as they can for a variety of reasons, chief among those reasons, particularly for new creators, is money.

Money is the reason, in my humble opinion, that some new creative people find themselves with a wonderful opportunity and completely fuck it up. Case in point…

Some time ago someone called and told me of the sweetheart deal he had made with a major entertainment company. Frankly I was very surprised because the idea (in my opinion) was just horrible and all the work this person had done that I knew of was just not professional enough to warrant the sort of deal he was talking about. But what do I know?

I have no right what so ever to judge what anyone creates or what some company wants to pay for. My opinion as to what is published or made into a TV show or movie means nothing except to me in reality.

But… as a person who is in the position of green lighting projects for the various production and publishing companies, my opinion matters if you bring something to me. Even then I may not the final decision maker depending on the type of deal I’m in with what company. All that said, the project I’m talking about I would not pitch to anyone I have a relationship with. Besides, the person who has the project somehow secured a deal with a major player and they don’t need me anyhow.

The way the project is being handled it’s only a matter of time before the company writing the check will either pull funding or replace the creator who brought it to them. The project is ripe with production problems and personalities that will cause the funding company to bail or take away all the decision making from the creator who sold his rights to the funding company.

Why has this not happened already? Because the company writing the checks is new to the comic book business and they don’t know what’s bullshit and what’s not. But no one can keep up a smoke and mirror con job forever, eventually someone in the funding company will not give a fuck about the potential of the idea. They will start to wonder why the creator and his team have missed every deadline and call someone outside of the creator’s team to see what the fuck is up.

Sensing he was in trouble, the creator called me and asked me to be involved. I listened to the pitch because the company they had the deal with is huge. After the pitch I took a meeting with the team putting it together and realized that these guys were way out of their league. I explained to them where I saw real problems and cautioned them that the funding company would eventually see the same problems as I and grasp that the business plan and projections the creator and his team presented were unattainable at best and just bullshit at worst.

I was the guy the entertainment company called a few weeks later and asked to take over the project.

I declined. It’s just too much trouble, I don’t have the time and working with the creator whose days are numbered would be a nightmare.

This really is a dream project for the creator and rather he listened to me or not I do so wish it works out. I hope that the funding company does not get to a point of no return and decide because they already spent X amount of money they have to publish to recoup at least some of that money back.

That, by the way, is one of the reasons you see shitty product in the entertainment marketplace. Corporate decides that although the product is shit someone will buy it and instead of losing one million dollars they lose nine hundred thousand.

I hope I’m wrong and as bad as the project is it does gang busters in sales. I hope if that happens and the creator is still involved with the project he will count his blessings and not make the same mistakes again.