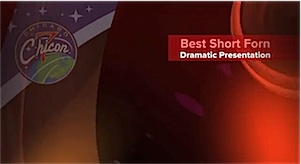 Back in March, I was asked to put together video clips for this year’s Hugo Awards ceremony, which took place during Worldcon in Chicago on Sunday. Simple assignment— find short clips of the nominated works to introduce them to the audience.

Well, it didn’t quite happen that smoothly. As you may have heard by now, in the middle of the Hugo Awards ceremony at Worldcon, with thousands of people tuned into via video streaming service Ustream, from the people in the overflow room at the convention to people viewing it live at DragonCon to people all over the world, the feed cut off just as Neil Gaiman was giving his acceptance speech for his Doctor Who script, “The Doctor’s Wife”, replaced with the words, “Worldcon banned due to copyright infringement.”

Do you see anything in there that violates Fair Use? Of course not. But then, you’re not an automated copyright violation monitoring service, which is what UStream is blaming the problem on. (You’ll note that this video is currently hosted on YouTube, and they don’t seem to be having any problems with it.) I happen to strongly disagree: this service worked almost exactly as UStream intended it to, with the exception that they couldn’t do anything when it was discovered that, whoopsie! The automated service has no intelligence and no off switch, and we’ve just pissed off people with millions of twitter followers. I also note that UStream has been taking down comments on their own site, which of course has not stopped people from commenting on Slashdot, TechCrunch, io9, and CNN stories.

I’m also marveling at the irony of cutting of Neil in mid-speech, as Neil is one of the foremost anti-censorship people in the comics industry, as a board member and major backer of the Comic Book Legal Defense Fund and a supporter of anti-censorship actions on the web going back to the 90s.

We’re still waiting for the full awards ceremony to be rebroadcast. In the meantime, we hope that you were following our Twitter feed, as we were covering the awards live. Universal Geek has posted audio of Neil Gaiman’s Hugo acceptance speech. And here is the clip reel for the Best Dramatic Presentation, Short Form:

Congratulations to all the winners. We hope the rest of the world will be able to see your victories shortly.

UPDATE: Yes, irony of ironies, the video is currently offline at YouTube due to a copyright claim from the BBC. Yes, we’re disputing it.