Eclipso – A Dark and Shadowy History 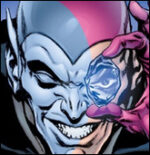 Dan Didio has written the latest iteration of the character for Villains Month, part of the new Forever Evil crossover event.  It ties up a plot arc that’s been weaving through the New 52 books since their inception – the villain’s black diamond has appeared in the short-lived Team 7 title, as well as Catwoman Demon Knights and even Sword and Sorcery. So clearly his return is intended to be a big one.

But this isn’t the first time DC has tried to make Eclipso into a top-echelon threat. Not by a long length.

People go on about how many times Aquaman has been revamped, but I gotta tell you, I think Eclipso has him beat.  Originally a sort of Jekyll-Hyde pastiche, he was released from within scientist Bruce Gordon whenever he was caught in the shadow of an eclipse.  Fortunately, eclipses are rather rare, so the character almost never appeared…oh, wait…ah, I’m being told that he could also appear under the shadow of an artificial eclipse, like a tea tray being used to block the light of a sunlamp.  Well, that certainly changes things.

He had a run in House of Secrets that got reprinted quite a bit in the wonderful years of the 100-page Super-Spectaculars, where people my age got most of their knowledge of the golden age and early silver age of comics.  He re-appeared on occasion when they needed a relatively generic and replaceable villain – he showed up in the Metal Men book as a Big bad, for pete’s sake.

It was with Eclipso: The Darkness Within that they first tried to make him into a major player.  Eclipso was now a major force of evil, hidden on the dark side where he secretly tried to control and destroy the shards of a massive black diamond, the Heart of Darkness.  But a visit by Lar Gand (Not the Legion’s  Mon-El, but the post-crisis version…look, just read my history of the character if you feel the need to catch up) gave Eclipso the idea to use the diamonds to possess the heroes of Earth, just as he’d used the first/original shard to possess Gordon.

The series did well and spawned a Eclipso title, one of the few times a villain carried a book.  Bruce Gordon was now being played as the Van Helsing to Eclipso’s Dracula, the Nayland Smith to Fu Manchu.  The book didn’t last all that long, and Eclipso sank back into the mid-card.

ComicMixer John Ostrander got ahold of him during his exemplary run on The Spectre, and the history changed again.  Not merely a demon of evil, Eclipso was in fact God’s first tool of Wrath, before The Spectre.  Eclipso, it’s explained, cause the biblical Flood at God’s behest.

This version of Eclipso returned a number of times, possessing Superman, taking Alex Montez as a host in a great arc in JSA, and most controversially, taking over Jean Loring, who was in quite a state after the events of Identity Crisis.

But in there, we got another version of his origin.  Now it’s explained that the black diamonds came from Apokalips, and Eclipso was created by Darkseid.  That was one of those changes that turned vast gouts of the past of the character into the rubbish heap, and it was not taken well by fans.

The New 52 has seen fit to bring the character back to his “god of vengeance” position, though his connection to God has not been re-confirmed.  With a number of appearances in several books, it’s a thread that has been in place for about all of the New 52.   Dan Didio, who did a very good job with the first few issues of Phantom Stranger, does a good job here summing up the latest new history of the character, and making clear how big a threat he can be.  Another small change – Bruce Gordon has now become “Gordon Jacobs,” likely to make the name more different from its original in-joke sources, Bruce Wayne and Commissioner James Gordon. He’s now being portrayed as a disgraced scientist, after an experiment with a solar-powered city goes terribly wrong.  This sets Gordon up to be tempted by Eclipso, as opposed to merely possesed against his will.  Like the spin made the the Phantom Stranger, it allows the character to be a bit more complex.

They’ve used Phantom Stranger to set up a couple other powerful Mystic characters – the first appearance of Raven was made there, though not mentioned by name, and that of her demonic father, classic Teen Titans foe Trigon, who also received a Villains Month issue.

Whether Eclipso will be a major player in Forever Evil, or if he’s being set up for an even later use is unsure.  But with the amount of time they’ve spent into setting him up, there are clearly big plans for the character.