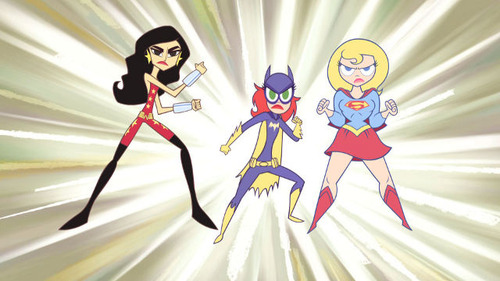 Warner Bros. have put out some fantastic shorts during their DC Nation programming block on Cartoon Network. They are evolving one of those into a series – Teen Titans Go! It’s almost a continuation of the old Teen Titans animated series but either way, sounds like fun. I know a lot of folks were hoping SBFF would also move on to a half hour series as well but from what I’ve been hearing, it’s not likely and my question is – why?

Warner Bros. don’t believe a “girls” show has the same selling power as a “boys” show and I’d like to prove them wrong. I’d point them to the huge successes that were Lauren Faust’s Power Puff Girls (EDIT for clarity, I know Craig McCracken created PPG, Faust also worked on the franchise. Sorry if I confused anyone!) and My Little Pony: Friendship is Magic were, I’d tell them women make almost all the purchasing decisions for their household (specifically entertainment), that they are seriously underestimating how much parents spend on their daughters, and that children aren’t the only consumers of animated TV shows and their related products. I could do that but what I’d like to see right now is all of YOU do that.

Reblog or like this post if you’d not only watch a Super Best Friends Forever television show but buy products based on it. (Money talks, remember?) Add your own commentary or not but let’s see what the numbers say.

(Originally posted at The Bird And The Bat, whatcha think about that?)