All Pulp Interviews – Will Meugniot 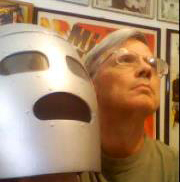 Prolific artist Will Meugniot has worked in comic book, animation, picture books, and more. All Pulp recently sat down with Will to talk about his career, his artistic influences, the differences between working in animation and comics, plus his pulp interests.

WM: I grew up in the 60s. It was a great time to be a kid interested in adventure fiction. Marvel and DC’s superhero revivals spurred many other publishers to enter the field, so you never knew what great comics you’d find when they finally opened the bales at the grocery store.

A similar thing happened in paperback books. Ace discovered that some editions of certain Edgar Rice Burroughs books had fallen out of copyright, published them, and triggered a pulp revival, which brought everything from Otis Adelbert Kline to Doc Savage back into print.

Doc was my favorite of the pulp heroes, though I bought as many reprints of The Shadow, The Spider, Phantom Detective and Dusty Ayres as I could find and afford. Related to this, I’m also a big fan of the sound serials and have a collection of most of the non-westerns on DVD.

WM: It means stories which focus on fast paced action in exotic locales and feature larger than life heroes and villains. On a personal note, I grew up in a small farming town and yearned for a larger life full of adventure. The pulp heroes pointed the way, and while I’ve never taken down a globe conquering miscreant, I have had a few interesting overseas experiences in my travels as a producer/director.
AP: When I think of Will Meugniot comics, I think of DNAgents (I’m proud to say I have the entire run) and FemForce. How did you get your start in comics and what is it that excites you about working in comics?
WM: First, thanks for thinking of my comics! So much of my time has been tied up doing animation that I really haven’t done as many comics as I intended.

I first broke into the comics in the 1970s doing strips for undergrounds like The OK Comics tabloid and ‘ground level’ early direct sales books like Faeiry Star. My big break came when I sent Marvel a batch of sample pages featuring characters which didn’t have their own strips at the time: Guardians of the Galaxy, Ka-Zar, Nick Fury, and the one that paid off, Tigra. I did a couple of issues of that, then Marvel imploded and I was out, but fortunately, Tony Isabella showed Mark Evanier some of my uninked pencils. Based on them, Mark gave me work on the Tarzan and Korak comics he was editing for Edgar Rice Burroughs, Inc. That lasted for almost a year, but Marvel took the Tarzan license and the ERB line was cancelled, which was what sent me into animation.

A few years later, my friend Dave Stevens came by the Marvel animation offices to score some free Xeroxes of his as yet unpublished Rocketeer. (Which was OK with the company, BTW – it was very ‘family’ oriented and Dave had worked for its previous incarnation, DePatie Freleng.) Dave told Rick Hoberg, Russ Heath and me about the new creator-owned comics movement, and got us excited by it. I phoned up Mark to see if he was interested, and that’s how DNAgents and the second phase of my comics career began.
The things I love most about comics are the creative freedom, and the ability to do a piece of art which is identifiably your own. Animation requires you to blend into the style of the series, and by its nature results in work which is largely anonymous by design. I’m thankful and surprised that so many people recognize my work in that field.

AP: I assume you get this question from time to time, but has there been any consideration of you and Mark Evanier doing more DNAgents stories?

WM: We’ve come close a few times, and I suspect we’ll do something with them in the next few years. Mark and I have stayed friends, but our careers have gone down different paths and it’s rare for us to have a big block of time free simultaneously.

I’m tightly booked for the next year or so with the N.E.D.O.R. Agents, a graphic novel of The Land That Time Forgot, Caspak (written by the great Martin Powell), and it looks like the pilot for an animated series I directed this summer clicked and the show will be in production as well.

AP: The Zombie Monkey Monster Jamboree book by you and J. J. Hart looks to be a pulpy fun ride. Tell us a bit about the book and what inspired it.

WM: My friends Shannon Denton and Patrick Coyle started a line of picture books under their Actionopolis imprint and invited me to do one. Zombie Monkey was already written, and I loved the subject matter of boy scouts versus zombified monkies, so of course I said yes! I’ve also illustrated a couple of other children’s books for Actionopolis, Pandora, and my favorite, The Boy Who Cried Wolf. I think you can still get all of them on Amazon.

AP: Where do you, or would you like to, see the comic book industry in 5 or 10 years?

WM: I’d like to see it alive! This is a moment of incredible danger and opportunity for the industry. There is a clear shift in the way the medium will be distributed and that is going to ultimately affect its form. I don’t think print is going away, but I suspect we’re going to see a lot more print on demand and print to preorder books with the bulk of the distribution going electronic. Luddite that I am, I’m focusing on print at the moment, just because I love the feel of the physical product.

AP: With the advent of digital comics, the way many read comics has changed. What are your thoughts on digital comics and their impact on the industry and readers?

WM: There is a need to adapt to the market, and it’s clear many younger readers prefer reading on a screen. The upside is that distribution costs should be less in the long run. The downside is that many publishers seem to be ignoring their responsibility and need to help the current and very important to the industry’s long term health distribution system with the shift.

﻿AP: You’ve produced and directed several animation projects from The Real Ghostbusters, G.I. Joe, X-Men, EXOsquad, Jem and the Holograms, Conan, Captain Planet, Spider-man, Stargate, and more. How did you make the transition from comics to animation and what are the similarities and differences between them?

WM: The shift was an economic necessity for me at the time, and was achieved by dumb luck.
It started when Mark Evanier ran into Don Jurwich, producer of the Super-Friends cartoons. Don knew Mark had done comics and mentioned that Hanna Barbera was looking for artists with comics experience to help on the new action shows they’d sold for the 1978 TV season. Mark suggested I cold call HB and ask about it, so I did. The girl at the switchboard asked me whom I’d like to talk to and I said, “The producer doing the action shows.”

She hooked me up with Doug Wildey (creator of Jonny Quest), which resulted in my being hired as a layout artist on his Godzilla series. Doug was a huge influence and a great teacher. I started drawing storyboards on the side for him, and we both realized that doing boards came naturally to me, so Doug brought me in house as his assistant, handing out and editing boards on Godzilla and Jana of the Jungle. He even let me do the retakes and meet with the clients on some episodes, which was a rare and generous thing. My next boss after Doug was Tex Avery who was the storyboard supervisor on The Thing, a comedy cartoon about Marvel’s Thing. I had great basic training.

While they are similar in some respects, film and comics are two different beasts. One of the things I’m really enjoying about my current strips is going back to form with them and using all of the classic devices which are unique to the comic book: varying panel sizes (the aspect ratio is constant in film, but it doesn’t have to be in comics), internalized dialogue via thought balloons (much more fluid that doing a voiceover to convey thought in a film), and even visualized sound effects via display lettering.

AP: Who are some of your artistic/creative influences?

WM: Kirby, Wood, Ditko, Williamson, Colan and Frazetta are the main ones. I particularly admire Wood as an artist/writer.

AP: What does Will Meugniot do when not making comic books?

WM: Professionally a lot of cartoons, either storyboarding or directing. Privately, I love old movies and non-fiction books about comics, movie serials and biographies. I also like just hanging out with my wife of 40 years, Jo.

AP: Where can readers find learn more about you and your work?

WM: I have a website: http://www.storyboardpro.com of which I’ve been very negligent, but features a lot of my art. My blog is www.maskedmayhem.blogspot.com I write about my interests there.

AP: Any upcoming projects you would like to mention?

WM: N.E.D.O.R. Agents is the big one at the moment. It has a 3 page preview in FemForce 156, a 26 page story in FemForce 157, and its own cover and 20 pages of story in FemForce 158. PREVIEWSworld is doing a Facebook promotion with me for the strip. If you ‘like’ their page, you’ll be able to follow the strip there and enter some contests to win original art, too.

AP: Are there any upcoming convention appearances or signings coming up where fans can meet you?

WM: I’m sorting that out now as part of the PREVIEWSworld promotion. Follow them on Facebook for updates about my appearances.

AP: You have served as a writer, artist, producer, and director. Are there any creative areas you’ve not been worked in that you would like to try your hand at doing?

WM: At some point, I’m going to do some low budget live action work as a director. It’s been offered me in the past, but I’ve just been too busy to take it on.
﻿

﻿AP: And finally, what advice would you give to anyone wanting to work in comics, animation, and/or art?
WM: The main thing is to DO IT. You’re not a writer unless you write. You’re not an artist if you don’t create art. Don’t let your fear of rejection stand in your way of doing.