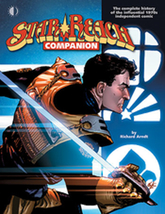 If I quit my day job, I just might possibly keep up with the output from TwoMorrows Publishing. Sundry regularly published magazines (Alter-Ego, Back Issue, Draw!, etc.), trade paperback and hardcover profiles of significant creators, publishing lines, eras and events – I can’t begin to list them all here. Well, I could, but they do a better job on their own website.

Did I mention they do everything up in both hardcopy and digital? Well, they do, and they’ve made many an otherwise tedious commute into Manhattan a lot more palatable.

I only get to bring to your attention a small fraction of their books. I’m still pissed that travel and work schedules didn’t allow me to review their Matt Baker: The Art of Glamour. So, to paraphrase the great Jack Kirby (and, yeah, they also publish The Jack Kirby Collector), just buy it.

But I will seize this moment to briefly wax poetic about two of their latest releases: The Star*Reach Companion by Richard Arndt, and Dan Spiegle: A Life In Comic Art by John Coates. 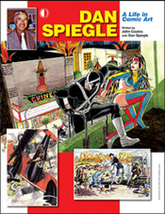 Dan Spiegle is a proper legend. As a kid I missed most of his “early” work because I didn’t like westerns (aside from Maverick; lucky for me, Dan drew the comic version) or teevee tie-in comics. Therefore, I missed out on his beautiful Hopalong Cassidy newspaper strip and his work on Lost In Space and other Dell/Gold Key titles. I did latch onto his work in Korak, Green Hornet and Doctor Solar, but he met me more than half-way when he started working at DC Comics in the 1980s (Jonah Hex, Teen Titans, Unknown Soldier). The work he and Mark Evanier did on Blackhawk single-handedly justifies the overworked and overwrought concept of rebooting. He and Evanier (who wrote the introduction to this book) also did one of my all-time favorites of the era: Crossfire, published by Eclipse Comics during the Great Independent Age of Comics.

Dan Spiegle: A Life In Comic Art contains everything you would expect in such a volume: history, index, interviews. It is lavishly illustrated, and, yes, it’s okay to just look at the pictures (yeah; just try that!). There’s eight color pages reprinting some of his watercolors; most of us haven’t seen them before and, damn, are they worth the wait. There’s at least four of them that I would steal if I was clever and fast enough to get away with it.

The Star*Reach Companion is a long-overdue analysis of and tribute to Mike Friedrich’s classic anthology comic. Mike thought it was a great idea to get some of the best people doing comics at the time to create, writer and/or draw stuff that was of a more mature nature – and I don’t necessarily mean salacious – and there “some of the best” includes Neal Adams, Frank Brunner, Howard Chaykin, Steve Ditko, Michael T. Gilbert, Dick Giordano, Steve Leialoha, Marshall Rogers, P. Craig Russell, Dave Sim, Walter Simonson, Ken Steacy, Dave Stevens, Mike Vosburg, Barry Windsor-Smith, John Workman …you get the idea. I’m hard-pressed to think of an anthology series with a better line-up.

Not that a lot of folks didn’t try, and a great many of them were quite, quite good. The Star*Reach Companion covers most of these publications as well, and here it serves an important historical function.

The problem with books like these is that, if they are successful, they leave the reader with a thirst they can never quench. Sure, we can pick up the back issues and the reprint books – and after reading these two, I’ll bet you wind up doing at least a bit of that. If you don’t, you’re missing something.

In fact, this is why I implore comic book stores with large back issue inventories to stock TwoMorrows’ books and magazines. They publish the true comics Who’s Who of What’s What.