REVIEW: “Emperor Mollusk Versus the Sinister Brain” by A. Lee Martinez 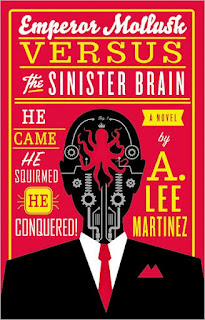 Martinez has been writing humorous SF novels for close to a decade now, all of which have looked like fun to me, but Emperor Mollusk versus the Sinister Brain

is the first one I managed to actually read. It’s the SFnal story of a world-conquering squid from Neptune (a super-genius squid from Neptune) in a very comic-booky universe, where every planet in the solar system has an indigenous race with their own high technology.

Emperor Mollusk narrates his own story, starting well after he’s conquered Earth (for its own benefit; he’s a very benevolent tyrant) and mostly focusing on his battle with a new would-be conqueror, who may be even smarter than he is. It’s quick and zippy and colorful and amusing, filled with quips and explosions and last-minute escapes and triple reverses and more high-tech gadgets than all of the Bond movies put together.

And if I even wanted to do a serious critical take on it — and who would want to do such a thing to a book like this? — I read it too long ago to remember any of the pertinent details. Emperor Mollusk is fun, and smart about its generic materials, and thoroughly amusing. I’d be very happy to read more by Martinez if this is the way he usually works.