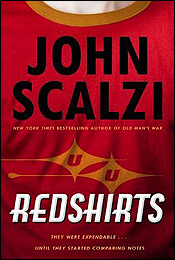 I love to read. I have ever since I was very small. I startled my parents when I started reading the milk cartons and cereal boxes aloud when I was in pre-school. I love it when a book sweeps me up and takes me wherever it is set. The genre doesn’t matter – fiction/nonfiction, history/memoir, sci-fi/fantasy, mystery/western – just tell me a good story and I’m yours. If I don’t have a good book to read somewhere around the house, I get a little hinky.

If the author wastes my time by not telling me a good story, I get a little irate.

Fortunately, John Scalzi tells a very good story with his new novel, Redshirts (Tor books, hardcover). Tells a very funny, engrossing and ultimately thoughtful story in a novel that includes three codas at the end. Tells a story that will strike very close to home for Star Trek fans, especially those of the original series.

SPOILER NOTE: I’ll give some things away about the plot as this review goes forward. Can’t discuss the story without talking about the story but I’ll try to give away as little as I can. This is as much warning as you’ll get.

The story is set in the Universal Union, mostly aboard its flagship, the Intrepid, and Ensign Andrew Dahl is happy to be posted to it – until he notes something odd. There are all these away missions and the command crew, the captain, the chief science officer, and the astrogator are assigned along with some low level member of the crew. Like ensigns. There’s just about always a fatality but not among the command crew although the astrogator can get hurt really bad but recovers within a week. Odd, to say the least.

These moments come and go but, when they come, it’s as if the crewmembers aren’t really in control of their actions. As it turns out, they’re not.

Turns out that, in an alternate universe/timeline, they’re all characters in a cheesy Star Trek knockoff TV show and their lives are being controlled by a bunch of hack writers. Dahl and an intrepid group of fellow Intrepid redshirts have to travel backwards/sideways/whatever in time/space/dimensions/whatever via a means familiar to Star Trek fans to somehow stop these writers (mainly the head writer) from probably killing them for cheesy dramatic reasons, usually just before the commercial break.

The story owes something of its concept to the wonderful movie Stranger Than Fiction (my favorite Will Ferrell movie and maybe my only fave Will Ferrell movie) and acknowledges that but also, to my mind, owes its tone to an equally wonderful movie, Galaxy Quest, which it doesn’t acknowledge. There are flaws: many of the characters are identified only by their last names and are more a collection of characters traits then characters. On the other hand, that may be deliberate since the book satirizes that way of creating support characters on TV and indeed elsewhere. Take a character trait from column A, column B, and column C and provide a name and – bingo! – instant character. To my mind, they also sounded quite a bit alike but what they said was often funny and entertaining. I just had trouble telling them apart sometimes.

The book is clever and light which makes it great for summer reading. It doesn’t get particularly deep until the three codas that follow the end of the story proper. They’re like three short stories using minor characters in the main book. Here Scalzi plays more with the concepts brought up in the main story. I can see why they are separate – the tones wouldn’t work in the primary narrative but they’re very worth reading and add a great deal to the overall book.

Recommended. It also makes me very sure that I never want John Gaunt to find a way to meet me. I’ve done too many nasty things to GrimJack all in the name of compelling narrative and I think he would hurt me bad. So – shhhh! Don’t tell him where I live.