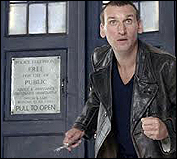 I discovered the Time Lord back in the late 1970s (I think), when WNET, the New York PBS station, started running the Tom Baker episodes. Baker’s Doctor, with his floppy-brimmed hat, outback duster, and loonnnng, multi-colored, scarf – did Granny Who knit it for him? – was the itinerant cosmic hobo. Only instead of hopping the rails, he “tripped the light fantastic” across the universe in the TARDIS. Companions Sara Jane Smith (the late Elisabeth Sladen) and Harry Sullivan (Ian Marter) were – seen with the advantage of hindsight –sort of “Mulder/Scully” prototypes, with Sara Jane as the believing Mulder and Harry as the skeptic. I can’t say that the British military operations called UNIT – Unified Intelligence Taskforce – was the FBI, although Brigadier Lethbridge-Stewart did sort of act like the Assistant Director Walter Skinner, walking the high-wire tightrope between helping the Doctor and answering to his superiors.

Like every other Whovian, I mourned – and was really pissed off – when the BBC stopped producing the series.

And like every other Whovian with Cablevision, I watched the relaunch of Doctor Who on Sci-Fi, with Christopher Eccleston as the Doctor and Billy Piper – the call girl of The Secret Diary Of A Call Girl on Showtime – as his companion, Rose Tyler. I really got into Eccleston as the Doctor, and was incredibly disappointed when he chose to leave the role after only one season…until David Tennant took over the controls of the TARDIS and the wielding of the sonic screwdriver. Like Rose, I fell in love with Tennant’s Doctor.

And I was deeply upset when, after five years, Tennant left. The love story between the Doctor and Rose added new and deep emotional resonance to the series and I didn’t want their tale to end.  So I was stubbornly anti-Matt Smith as the as romanticism and emotional I was not prepared to like Matt Smith as the Doctor’s eleventh reincarnation. I thought his introduction was stupid and boring, not funny, going though young Amy Pond’s refrigerator and kitchen pantry, tasting everything, spitting out everything.

Bow ties are cool. So are fezzes.

The absolute brilliance – imho – of Smith’s first season as the Time Lord, and the introduction of Amy Pond as, first, a young girl, and then as a grown woman (Karen Gillan), with the addition of Amy’s fiancée-now-husband Rory Williams (Arthur Darvill) won me over by the second episode.

Last night I watched The Science Of Doctor Who, which, like its predecessors The Science Of Star Wars and The Science Of Star Trek, explored how the show has influenced the scientists of today in making the science fiction of the Doctor science reality. Today I trolled BBC America’s Doctor Who web pages, watching sneak previews and reading about catching up on all things Whovian. Including the news that Gillan and Darvill will be exiting the show, and that it may have something to do with the Weeping Angels – to my mind the scariest and creepiest aliens to ever appear on Doctor Who. Yes, much more than the Daleks or the Cybermen.

But I do have one question.

Can someone please, please tell me when Season 7 starts?