Review: “Why We Broke Up” by Daniel Handler, Illustrated by Maira Kalman 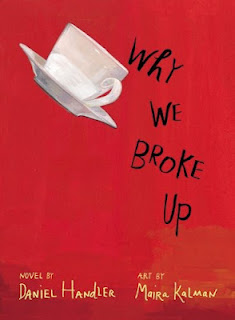 Handler has written for younger readers before: under his pen-name Lemony Snicket, he’s written one long, excellent middle-grade series (A Series of Unfortunate Events) and several one-offs, mostly of those ostensibly for even younger readers than that. But Why We Broke Up

is a novel aimed at teenagers, a YA novel rather than a middle-grade, and it appears under Handler’s own name, both of which feel important. Why We Broke Up is also told in first person by a character in the story — the novel itself is a long letter that she writes to her ex-boyfriend to accompany a box full of the detritus of their relationship — and in an emotionally colored, immediate voice much more like Handler’s adult novels (particularly his first book, the similarly teenager-focused The Basic Eight) than like the cool, detached, almost nihilistic voice of Lemony Snicket.

Minerva aims Why We Broke Up directly at that ex-boyfriend, Ed, in the way that angry ex-lovers always do. She’s young and unsteady and intensely wounded by what Ed did — what that was, we don’t learn until late in the novel — and digging through the wreckage of their lives to grab each memento and stab it back at him, hoping to hurt him the way he hurt her.

Min suspects, though — as we readers do — that he won’t be hurt the way she was; that he doesn’t have that capacity. Min and Ed were at opposite ends of high-school life: she was a foreign-movie-loving, semi-outcast underachiever, while he was a thoughtless, beloved basketball star. How could they have anything in common to begin with? How could they ever get together?

Why We Broke Up tells that story — what they found in common, how they spent their time, how they fell in love. And, then, how Ed screwed it all up. Handler seamlessly creates the voice of a real young woman — as he did in Basic Eighty, though Min isn’t nearly as screwed up as Flannery — and tells his story entirely through what she tells Ed (and, through him, us).

Why We Broke Up is also heavily illustrated — there’s a full-page painting by Kalman to begin each chapter, plus some smaller pieces as well — but those are entirely illustrations; they show the things that Min is writing about (and throwing into that box) rather than telling the story in a direct way. Kalman’s art has a loose, quick quality about it that fits well with Min’s headlong letter-writing; they both feel like things done immediately to express immediate emotion.

Why We Broke Up has the immediacy and emotion of a broken heart; it’s a thoughtful and heartfelt story of two people who just didn’t connect the way they should have, and what that meant for one of them. Even if you’re no longer a teenager, you might well appreciate Why We Broke Up if your heart was ever broken. (Also, it has a great back-cover line-up of quotes from fine writers talking about their own heartbreaks — my favorite is from Brian Selznick: “I knew I had to break up with Ann Rosenberg after she chose a teal dress for the prom. I had never heard of teal. Also, I was gay.”)