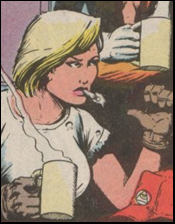 There’s an old maxim that says “God is in the details.”  So is a story and especially in comics.

I’ve said and I believe that a good writer can write any character. I don’t have to be African-American to write an African-American character; I don’t have to be female to write a good female character. Gail Simone, for example, writes terrific male characters. So did Kim Yale. Our own Mindy Newell does a terrific job as well with this. What you have to be able to do is have empathy and to understand what is universal – the common humanity. If you don’t connect with your characters, neither will the reader.

All that said, there is a need for what is called the telling detail. Something specific that helps the reader feel the story you’re telling is based in some kind of reality. You can do research and come up with a ton of details but not all of them are necessary for the story. It may be necessary for you as the creator to know them but they’re not necessary for the reader to understand the plot or the characters.

It’s what I call the “iceberg theory.” The bulk of an iceberg is underwater. That bulk is necessary for the part of the iceberg that shows. In the same way, you need to know a lot about the characters, the setting, the story but only a certain percentage of it needs to show. So you select which details help make the story real and convincing to the reader. Those are the telling details.

A writer needs to be able to describe the scene to the artist; likewise, the artist needs to pick the details that he or she will draw. An example is what the character is wearing. That is how the character chooses to present him or herself to the world and that says something. What Peter Parker chooses to wear as Peter Parker says something about him just as what Bruce Wayne wears as Bruce Wayne says something about him. They shop in different places. The look, the texture and the drape of an Armani suit is going to be different than something from Wal-Mart. The reader may not be consciously aware of those changes but, if those details are not there, if everyone dresses the same, the reader is going to pick up on that as well. It will feel false.

What we choose to wear says something about us. You may think that doesn’t include you; many guys – and sometimes I am one of them – will say they just pick what is clean, or cleanest. That, however, does say something about that person and how they wish to be perceived. Do you have a power tie? Do you wear something special when going to meet someone important? What are you projecting about yourself? How do you want to be perceived? It’s true in our lives and so it should be true in our stories as well.

In the past few decades, many people have opted to become walking billboards for a particular brand. It might be a cola company or a sports team or even a comic book character or comic book company (be sure to buy your GrimJack stuff at the ComicMix store, btw – end of shameless plug). By wearing that apparel, we claim a tribal affinity. Stuff like that used to be given out as free advertising; now you have to pay real bucks for them – and sometimes its not cheap – to say you belong. It becomes part of the wearer’s identity. Details like that matter.

When I taught classes at the Joe Kubert School, I tried to make the students think about character design, the costume. It’s not just a matter of what “looks cool” or is easy to draw. The character is telling something about themselves when they choose what they wear. It is a choice they make that says something about themselves and what they are trying to project. At least, they should.

When Jan Duursema, my partner of many Star Wars stories, draws the martial arts fights or sword or lightsaber fights, there is an authority there because Jan herself has studied martial arts, including swordplay. Jan thinks out her locales as well and includes all kinds of information in the background.

When I first met My Mary Mitchell and she showed me her portfolio, I was floored by the amount of telling detail in the panels. Her heroine’s bedroom looked like someone’s bedroom – there were details in the pictures and what the woman hung on the wall that made me think of her as a person. A few panels later, when the woman was walking down the street, there were all kinds of people in the panel, all different body shapes, all wearing different clothes. The clothes reflect what the weather is as well.

Mary also was conscious of the buildings in the background; like any real city, there will be different types of buildings one against another. It gives a visual texture. Too many artists draw a generic background and that makes the story a generic story. Cities are characters in the story; New York is different from Chicago which is different from Memphis or Detroit or Los Angeles or Portland. I’ve been in all those cities and you can tell.

It all matters. The storytelling needs to be universal and, at the same time, it all needs to be specific. It may sound like a contradiction but I’ve found throughout my life that truth lies in the seeming contradictions. God is a contradiction; he/she is in the details and so is the story.