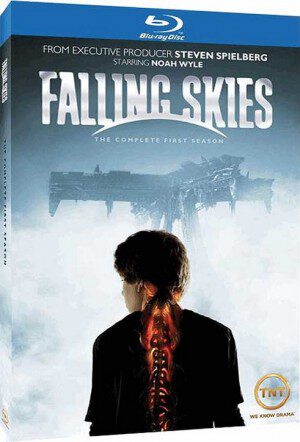 Everywhere you look, dystopia stories abound. Suzanne Collins’ The Hunger Games became the movie event of the spring while the most talking about new NBC series is J.J. Abrams’ Revolution. Little surprise then that basic cable’s ratings darling in 2011 was TNT’s Falling Skies. With the show’s second season debuting June 17, the first season has been released on DVD from Warner Home Entertainment. The premise is not necessarily an original one: aliens have arrived and have largely conquered Earth while small bands of resistance fighters struggle to free humanity. What the aliens want remains a mystery.

The series, which has been in development since 2009, was conceived by Bob Rodat, writer of Saving Private Ryan, and has been produced by Steven Spielberg, who enhanced many of Rodat’s notions. The showrunner for season one is my old pal Mark Verheiden (who handled a different dystopia on Battlestar Galactica), who brought his own point of view to the project. Verheiden’s sure hand made the ten episode first season quite entertaining and he’ll be missed when he moves to consulting producer (at least he wrote the two hour season opener for a smooth transition).

A history professor turned soldier, Tom Mason, is the series’ protagonist and is well played by Noah Wylie, mixing his knowledge with some grit while putting his two sons ahead of all else.  He is part of a regiment, the Second Massachusetts (near Concord, get it?), periodically receiving intelligence from nearby groups and sporadically getting news from armed forces elsewhere in America. The enemy, known as “Skitters”, are insectoid and reside in mammoth craft looming over key cities around the world. Using mechanical soldiers dubbed “mechs”, they maintain martial law and kill adults who oppose them, taking the children.

Over the course of the first season, we learn the children are bonded to biomechanical harnesses, which mentally connects them to a hive mind, and slowly alters their physiology so the children become skitters. One of the few false notes in the series is how slowly the intelligent men and women of the resistance connect the dots, which is far more obvious than they let on.

While it’s a fight for survival, it’s also a fight to maintain humanity, the elements that keep us above savagery. There are some who sell out to the skitters for survival, others who try to profit from their fellow man’s misery, and those who have been abused and subjugated. Mason takes orders from the alcoholic Captain Dan Weaver (Will Patton) while struggling with his feelings for Dr. Anne Glass (Moon Bloodgood).  His son Hal (Drew Roy) is old enough to engage in battle while the younger boy Matt (Maxim Knight) has been attached to a harness, struggling to retain his humanity. The rest of the cast are a mix of soldiers, teens, mechanics, and people from other walks of life forming an odd representation of mankind. People die, there’s little rest, and the stakes are raised as the skitters’ true nature are revealed. By the end of the compelling debut season, we finally meet the true aliens and that raised many questions that won’t be answered until this summer.

It makes for good television and the ten episodes hang together nicely, moving plotlines along while making certain each character gets deepened along the way. Few things are as they appear on the surface and war changes how people will act and think, which is amply demonstrated with Mason and the others. The cast is a strong one and the show’s bleak look is well executed.

In addition to the episodes, the set comes with an extended version of the pilot; pilot audio commentary; the obligatory season two preview; footage from the 2011 Comic-Con International panel; a bunch of deleted scenes; character profiles; international promos; behind the scenes featurettes, including the “Making of Skitter”, “Harness Makeup Tips” and “Director One on One”. The Blu-ray set comes with an exclusive collectible Trading Card tied to the Dark Horse Comics, which produced tie-in comics last year and bridged the two seasons earlier this spring with Falling Skies: The Battle of Fitchburg.

This is stylishly handled produced, well-acted, and takes its time to explore the ramifications of each revelation. While summertime usually means more carefree fare, you could not go wrong giving this your attention.