Win a Copy of Deliverance on Blu-ray 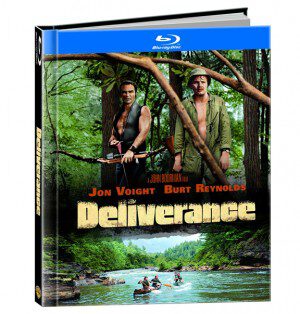 Few films were as atmospheric and downright scary as Deliverance when it was released in 1972. Director John Boorman made an indelible mark on film history with this film which features amazing performances by Jon Voight, Burt Reynolds, Ned Beatty, Ronny Cox, and James Dickey. Four city men on a weekend canoe trip pit their nerve and muscle against the churning waters of a wild Georgia river — where only three are “delivered” from the heart-pounding experience. These days, most remember the terrific music but forget just how tension-filled the rest of the film was.

A new Blu-ray edition of this seminal film is being released by Warner Home Video on June 26.  We have partnered with WHV to host a contest with one copy of the disc to be given away. Please note, we are not able to ship to PO Box addresses and winners must be within the United States.

In 2008, Deliverance was selected for preservation in the United States National Film Registry by the Library of Congress as being “culturally, historically, or aesthetically significant.” Pick one of these three qualities and tell us why the film deserves these accolades. Post your comment by 11:59 p.m. Friday, June 29. The judgment of ComicMix will be final.