FORTIER TAKES ON A GUEST WHO TAKES ON ‘TALES OF THE ROOK!’ 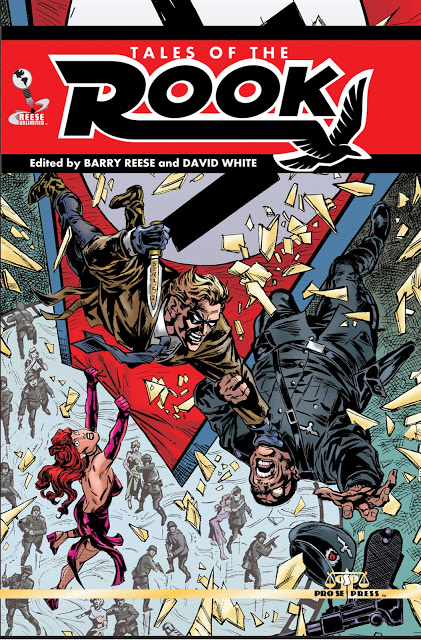 Barry Reese, the creator of the Rook, recently invited his New Pulp colleagues to enter his universe and take turns with his iconic character.  Five writers accepted his invitation and allowed their creative talents and imaginations to propel the Rook into dangerous predicaments and thrilling plots. I’d been waiting impatiently for “Tales of the Rook,” to arrive because I knew this anthology would be well worth the money and I was right.
Barry Reese rightly anchors the collection with his newest Rook tale called, “The Killing Games.” Reese’s story interrupts a sea voyage for Max Davies, and his wife, Evelyn, who are forced to journey to a mysterious island after their ship is damaged in a storm. Ruthless Nazis, a mysterious castle and other devilish surprises await them on this island.  Reese’s exciting tale sets the tone for the rest of the book.
I thoroughly enjoyed “The Miss Beantown Affari,” by Ron Fortier.  Fortier uses his keen eye for detail and his mastery of action sequences to turn a beauty pageant into a wild shootout and abduction. I can’t say too much more because I don’t post spoilers in my reviews. Still Max Davies/the Rook definitely finds a way to expose the sleazy underbelly of old-school Boston and pinpoint the reason for all this chaos.
Up next is Bobby Nash who really knows how to turn up the heat and compel the reader to feel claustrophobic in his brilliant tale, “Where There’s Smoke.” I felt sympathy for the Rook when he steps into a trap and realizes there’s no escape from an arsonist’s inferno.  What follows is a fast paced sequence of events involving a well-equipped, hard to defeat villain.
Reese, Fortier and Nash rely heavily on action and adventure in the first half of this volume.  The second part of the book, which features stories by Mike Bullock, Percival Constantine and Tommy Hancock showcases the supernatural aspects of the Rook’s crime fighting saga.
Bullock lures the Rook into a labyrinth of demonic intrigue in, “Onyx Raven,” an imaginative, well written tale which introduces an intriguing, new character named Xander Janus.  We will be seeing more of his adventures in the future.
Percival Constantine ups the ante with the Family Grace’s connections to vampires and zombies in an entertaining contribution called, “The Curse of Baron Samedi.” The fun of this story is Constantine’s Rook is not Max Davies, but a future hero wearing the bird mask.
At the end of the anthology, Tommy Hancock pits the Rook against the classic pulp villain Doctor Death in a highly descriptive page turner called, “The Rook Nevermore,” which sets the stage for future Rook novels to be penned by Hancock.
In the end, “Tales of the Rook,” is a satisfying blend of well written, carefully crafted stories which held my interest from beginning to end. Fans of New Pulp should add this book their libraries without hesitation!
Share