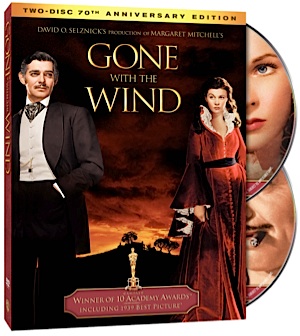 Since Gone With The Wind’s release in 1939, David O. Selznick’s adaptation has become one of the most hailed and loved feature films of all time. Adjusted for inflation, it remains today the number one box office champion with a total gross of $1,450,680,400. It deservedly won 10 Academy Awards and continues to be included in Top 10 lists with many catch phrases entering the public lexicon followed plus a score that is instantly recognizable.

On Tuesday, in time for your holiday shopping needs, Warner Home Video is releasing the 70th Anniversary edition of the film in a variety of formats. What was provided to ComicMix was the standard two-disc “plain vanilla” edition. We can tell you that it looks and sounds great and we suspect looks even more spectacular in its Blu-ray format.

Is there anything left to say about this beloved film? I had heard of it growing up but until HBO first broadcast it for the first time, I had no clue what the fuss was about. I still recall a bunch of us gathering at Beth Zemsky’s house to watch this spectacular without interruption and we were all caught up in different ways. For me, I enjoyed the sweep and spectacle, some of the performances and the nostalgic look back at a bygone era. The girls loved the romance.

In rewatching the film now, I find zero chemistry between Trevor Howard and Vivien Leigh, still befuddled over why she loved him. I also find it confusing to see how both Ashley and Melanie were so blind, in their own way, towards Scarlett’s spoiled rich girl ways. Only Rhett saw her for what she was and loved her for it. Rhett Butler is also the only one to see the South as an unsustainable culture and apparently the only man in the whole of the Confederacy to understand they couldn’t compete with northern factories. As a result, his decision to enlist towards the middle therefore makes no sense.

Honestly, the best character arc is Scarlett’s and there’s little more stirring than her return to Tara, seeing what had become of the lifestyle she understood and then declaring, set against a beautiful backdrop, she would never go hungry again. As the music swells and the intermission sign appears, you could have sent everyone home and they would have been thrilled. Instead, we get the second half which is far too melodramatic leading up to the immortal final scene.

Selznick spared no expense and the film is sumptuous, well cast and filled with enough extras to give it the sense of scale required for the needed emotional impact. From a technical standpoint, there’s not a single false note and the movie holds up during repeated viewings. SO, the bottom line comes down to the Margaret Mitchell novel and the characters adapted to the screen. If this is your sort of story then you can’t miss seeing the film. As for owning the new edition, that’s a subjective call. The new digital master seems superior to the last version but it’s the extras that will decide it for you.

For the cutting edge fan, here; there’s the 5-Disc DVD set which comes
in a limited and numbered Velvet Box. On the five discs comes the
remastered feature film plus more than 8 hours of extras, including an
all new documentary narrated by Kenneth Branagh “Warner Bros. Home
Entertainment presents 1939: Hollywood’s Greatest Year,” “[[[Gone with the
Wind]]]: The Legend Lives On” featurette, and much more. Collectibles
include an Exclusive 52-pg Hardcover Photo and Production Art Book, ten
(10) 5”x7” frameable Watercolor Reproduction Art Prints, Bonus CD
Soundtrack Sampler, and a reproduction of the Original 1939 Program.

The Blu-ray set offers up the film on one disc, which is finally nice
to have, and then all the previous extras are included on the next disc
with a third disc filled with Blu-ray exclusives including The Making
of a Legend documentary (1989 TV Special) (Narrated by Christopher
Plummer); Restoring a Legend – Chronicles the film/video restoration
process ; Dixie Hails Gone with the Wind -1939 Premiere newsreel ; 1940
MGM historical short – The Old South; Atlanta Civil War Centennial 1961
premiere newsreel; International prologue; Foreign language version
sample scenes; and Theatrical Trailers.