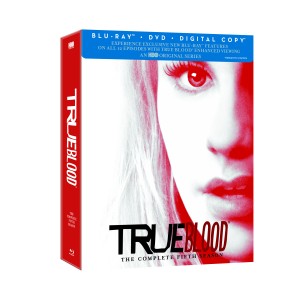 If True Blood Season Five could be easily summed up – and really, it can’t – the theme was about the consequences of one’s actions. Unlike the previous season, this one seemed determined to tidy things up and thin out the herd a bit. During the course of the season, Alan Ball let it be known this would be his final outing as showrunner and clearly, he was determined to be the one to say farewell to a few friends and foes. The season therefore zipped along at a wild, frenetic pace that saw more fangs, blood, and naked bodies than before.

Since Charlaine Harris’ novels began being adapted for HBO, the supporting cast has grown and interestingly, they’re the ones who appear to be the most interesting, getting the deepest development. The triangle of protagonist/antagonist/lover of Sookie, Bill, and Eric sees them getting the least depth this time around as the focus moves with regularity. 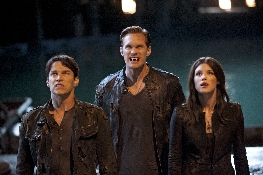 Sookie (Anna Paquin) is a telepathic human/fairy who can’t decide who will make her happiest: long-suffering Bill Compton (Stephen Moyer), now King of Louisiana; long-lived Viking Eric Northman (Alexander Skarsgård), or Alcide (Joe Manganiello), a werewolf for variety. She bounces from man to man, scheme to scheme and during the season never seems to take charge of her destiny, making her appear weak. 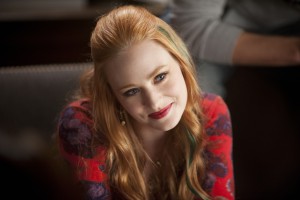 The series’ mix of characters, themes, and setting in Bon Temps has made True Blood addictive viewing and Ball gets the credit for finding ways of taking the novels and enhancing them for premium cable, highlighting the more visual character traits and dosing the series with plenty of sex and nudity. Its compelling television as pure entertainment and the fourth season left us panting for more. Similarly, by resetting the stage, season five left us ready for some new directions which arrive in June. Meantime, HBO has released season five in a combination Blu-ray/DVD boxset complete with excellent extras and Ultraviolet digital copies.

After a season resting under tons of concrete, Russell Edgington (Denis O’Hare) is back and seeking revenge against Bill and Eric. With Marnie the witch dispatched, they can concentrate on dealing with him, largely adapting Dead as a Doornail. Ball, unlike previous outings, knowing this was his last chance, as well as liberally lifting from subsequent novels in The Southern Vampire Mysteries. 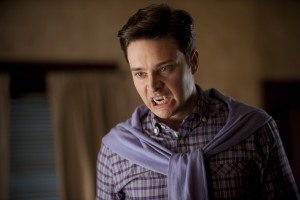 As has become custom, the new season picks up immediately where we left our fangbangers with Lafayette and Sookie standing over the bodies of Tara (Rutina Wesley) and Debbie. In short order, Pam turns up and agrees to turn Tara, a warped way of preserving her life and continuing to torture the strong character. Sookie agrees to help Pam (Kristin Bauer) fix things up with Eric, which is easier said than done, especially with the sexy blond, and Bill, arrested by the Vampire Authority, led by Roman (Christopher Meloni), for Nan Flanigan’s murder. Rev. Steve Newlin (Michael McMillian) is back, declaring himself a “Proud Gay American Vampire” while Jason (Ryan Kwanten), his former acolyte, deals with his new relationship with Jessica (Deborah Ann Woll), realizing the hookup now means his lifelong friendship with Hoyt (Jim Parrack) is done. Tara is finally resurrected and furious at being a vampire and her arc this season is coming to grips with her new reality, which also shows us another side to Pam. 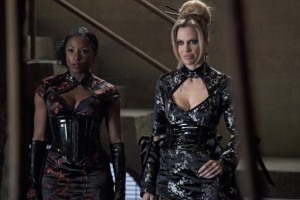 There’s plenty of Council political intrigue as they hunt Russell and deal with the rebellious Sanguinistas and Alcide has contend with the wolf pack that still disapproves of him. Meantime, the humans are tired of seeing their own kind become victims in the fighting and before the season is over, become a new threat. Meanwhile, Lafayette (Nelsan Ellis) has had enough brujo magic and finds his spiritual roots in signs from Jesus or is it his lover Jesús (Kevin Alejandro)? Jason, meantime, has his own spiritual journey as he learns what really happened to his and Sookie’s parents. Jessica, one of my favorite characters, finally grows up this season, playing a more pivotal role in the action.

The plot thickens, boils, spills over the pot and makes an attractive mess all across the south. There are the usual flashbacks to deepen some of the characters such as Pam’s first encounter with Eric. We even get ghostly visits from Godric (Allan Hyde) and a surprise, sinister return of Sheriff Bud (William Sanderson). 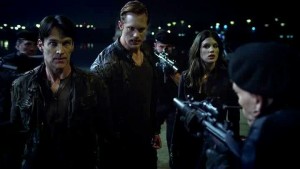 Then there are the side stories that enrich the world of True Blood without blunting the main events. This season there was a stirring sub-plot for Terry Bellefleur (Todd Lowe), exploring his military past with the return of former platoon leader Patrick Devins (Scott Foley).

And how could not love a tool called the iStake?

Just when you think things are bad, Bill gets corrupted and as the season – and Ball’s involvement – comes to an end, he turns out to be the biggest, baddest vamp of them suddenly becoming the threat for the forthcoming season.

It’s got the usual assortment of over-the-top moments, moving emotional beats, and plenty of atmosphere thanks to great writing and cinematography. Moyer made his directorial debut, seamlessly blending in with the strong helmers that keep things running at a fever pitch.

As usual with HBO releases, the transfer to high definition is superb with excellent sound so these stand up to repeated watchings. And in keeping with the first four sets, this one comes with plenty of Blu-ray exclusive features. The episode-by-episode enhanced viewing is present as are the interesting audio commentaries. We get, as part of the enhancements, Character Bios, Vampire Histories and Hints/FYIs; Flashback/Flash Forward, and, True Blood Lines, a guide. The usual post-broadcast Inside the Episodes is included.

Of particular interest is the Episode Six: Autopsy, with the cast and crew discussing how this particular installment was crafted which is pivotal to the series and a good glimpse into what goes into making any episodic television

There are Authority Confessionals, short snippets with the characters Nora, Kibwe, Rosalyn, Salome, Steve and Russell all talking vampires, blood, and politics. Amusing.

Those buying the five disc DVD will get only Inside the Episodes, the five commentaries and the previews/recaps.