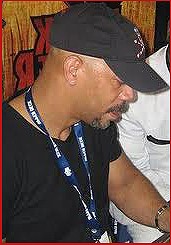 Over the years I’ve had quite a few young black creators insist they should be invited to sit on the Black Panel. For the record, that has never worked and most likely never will. I say “most likely” for two reasons: I try to never say never and I would be happy as a mofo to find someone so damn talented that I put them on the panel at first sight.

The Black Panel, for those unaware, is the African American pop culture forum I founded more than 20 years ago (when I was five, Jean) and for over a decade it has been a mainstay at Comic Con International. One of my pet peeves with some young black creators is they think they are owed something.

The following is typical of how I’m approached…

A few months ago I was walking the floor at Wonder Con with Denys Cowan and a young black artist noticed my nametag, came up to me and insisted he should be on the Black Panel. After he spent a good five minutes or more telling me how good he was I asked him if he felt he was good enough and established enough to be on a panel with Denys Cowan.

He had no idea who Denys Cowan was.

I told him he was not ready and he asked how could I make that decision without looking at his work. I said when he figured that out then maybe he would be good enough for The Black Panel.

A young African American artist who does not know who Denys Cowan is?

The Black Panel is a forum of truly extraordinary people who have done extraordinary things within the African American media space. The panel is set up so these amazing professionals can share their insights with their fans and with young creators.

This year I expect more asshole haters on the net because there are two white people on the panel. The Black Panel is not just for black people. It’s for people who have done noticeable work within the African American media space. Over the years I’ve had plenty of blue-eyed soul brothers on the panel. This year will be a first as we welcome our first blue-eyed soul sister to The Black Panel.

I’ll see if I can let my ComicMix readers in on the panel participants before Comic Con releases the info on their website. If they won’t mind I’ll post the names here. The panelists are some of the coolest I’ve ever had and I’ve had some cool ass panelists.

Check them out for yourself at theblackpanel.com.

If by chance you are the young artist I spoke to at Wonder Con and you still can’t figure out what I meant when I said you were not ready, here’s some clues:

If you do that, come find me after the Black Panel and I’ll spend some time telling you how to get to the next level.