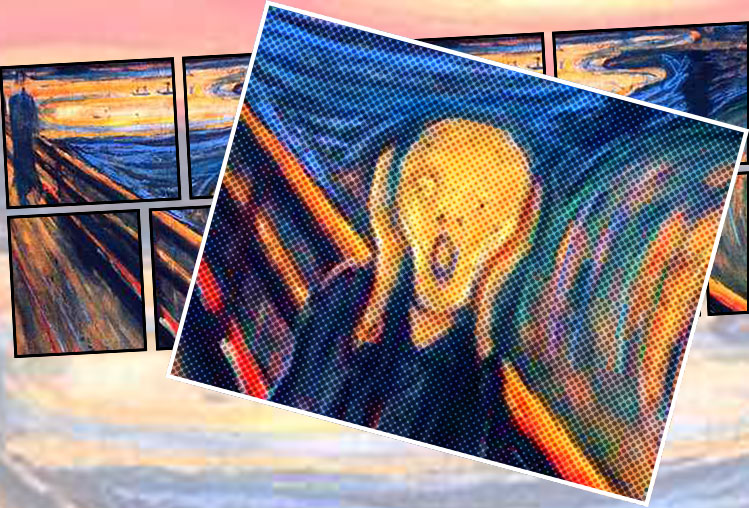 You sure wouldn’t know that the world is in an economic crisis by looking at the prices that have been paid recently for original art. Both Christie’s and Sotheby’s auction houses, who’s  recent auctions collectively tallied $266,591,000, established record sale prices for pieces of art including the most expensive work ever sold at auction, Edvard Munch’s ‘The Scream’ which garnered a whopping $120 million! 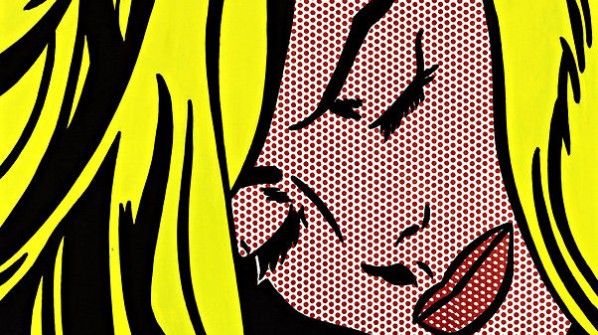 Fans of comic art began to scream themselves when Roy Lichtenstein’s painting, ‘Sleeping Girl,’ sold for $45 million, a record price for any of his works. Lichtenstein is often criticized by comic art enthusiasts for not having credited the long list of comic artists whose work he used as subject matter for his paintings. Comparisons of ‘Sleeping Girl’  and the Tony Abruzzo panel which it is derived from, as well as dozens of other comparisons,  can be seen here. David Barsalou deconstructs Lichtenstein with a vengeance and it is well worth following his crusade on the internet and in his facebook group.

The good news is that, though comic art has been generally viewed by the fine art community as “low brow” and is still not in a position to command the kind of money that Munch or Lichtenstein’s pieces do, original comic art is beginning to command some very respectable prices. It has long been known that there is value in collecting comic books. The highest price paid so far for Action Comics #1 being $2.16 million. The same comic book is estimated to be currently worth about $4.3 million. 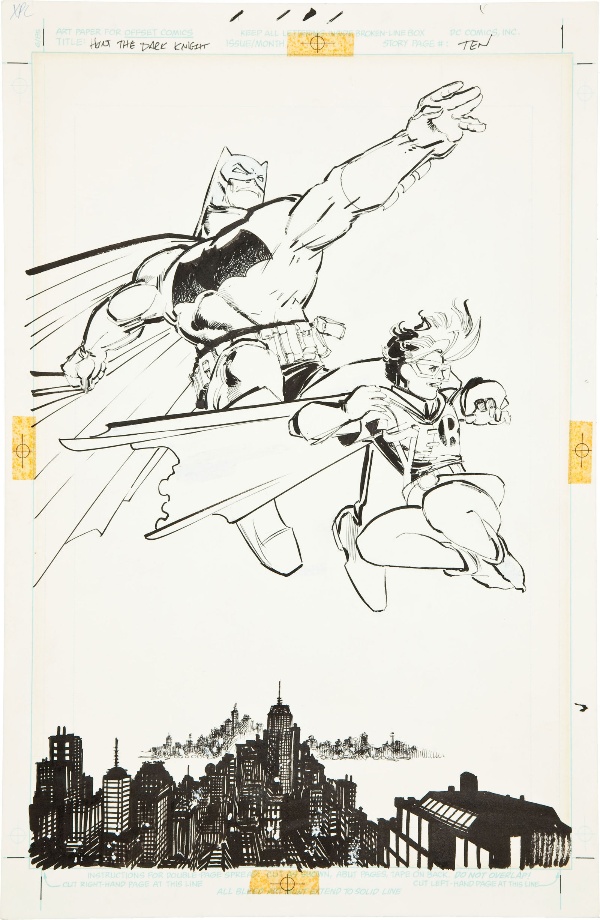 Original comic art, on the other hand, is now gaining in value as well. The most expensive piece of comic art ever sold is reportedly a full page panel by Frank Miller and Klaus Janson from ‘The Dark Knight Returns.’ The piece sold to an anonymous collector for $448,125 as part of Heritage Auctions’  Vintage Comics and Comic Art Auction in 2011. 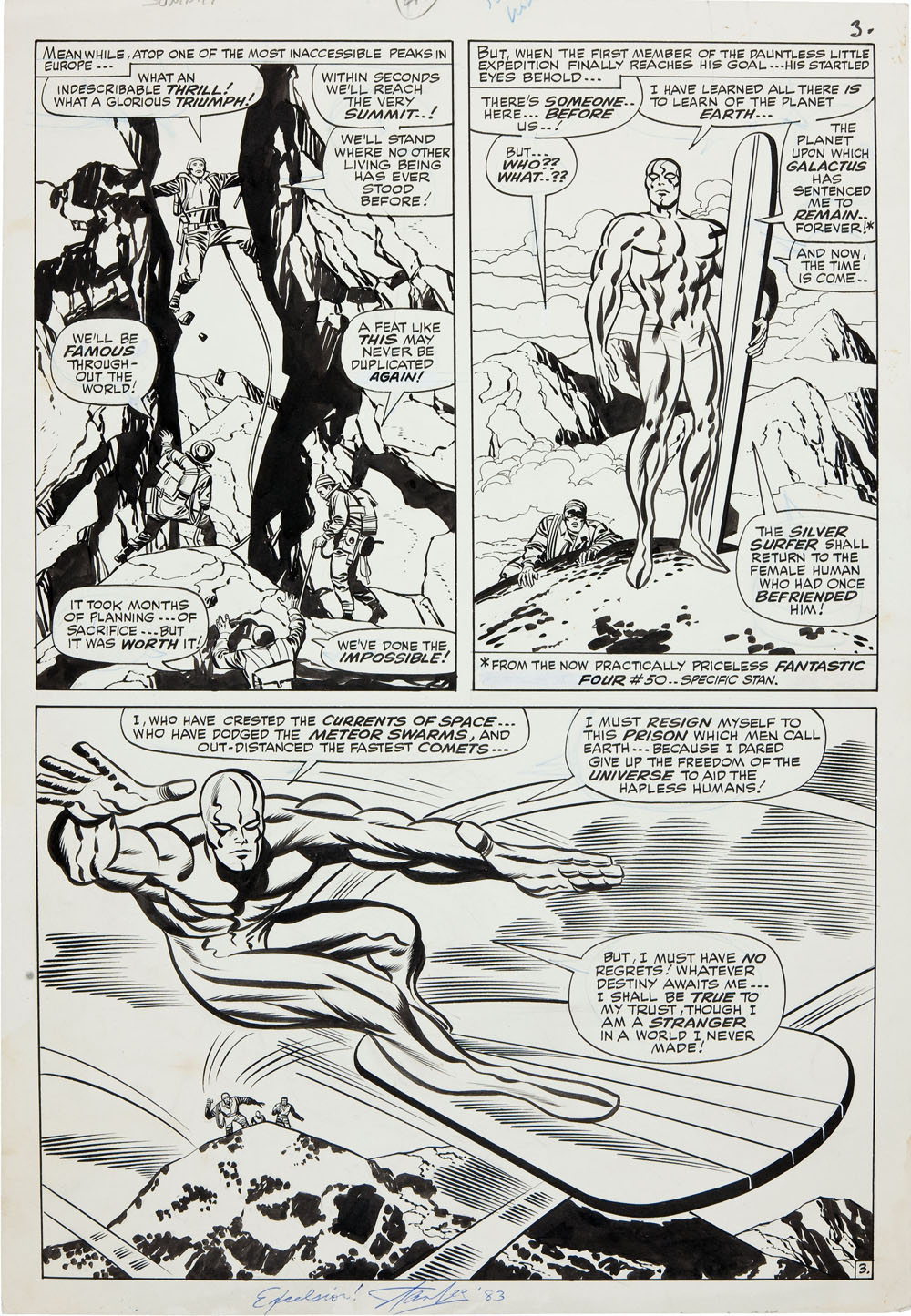 In the past week Heritage auctioned two more significant pieces that collected big bucks. Contradicting the earlier report Heritage claims that a Jack Kirby, Joe Sinnott original from Fantastic Four #55 featuring a half page splash of the Silver Surfer and signed by scripter Stan Lee achieved the highest price paid for a page of panel art selling for $155,350, roughly one third the value of the Batman piece. 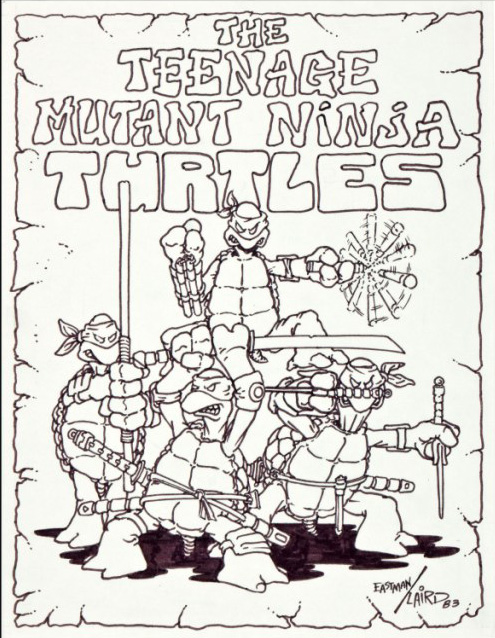 Another work of original comic art that proved its muster was the first ever drawing of the Teenage Mutant Ninja Turtles by Kevin Eastman and Peter Laird that fetched $71,700.

Forbes recently ran an article on their site that lists good reasons for investing in comic art  but neglects the obvious: Supply and Demand.

Though it may seem that there are tons of original comic art proliferating in the market, and there are, how many show significant images of major characters drawn by masters of the industry or are pages from historic works? Not as many as you might think and now that a lot of art is created digitally, the chances of hard copy future original art surfacing for sale are dwindling.

The idea that there are over seventy years worth of original art numbering in the millions of pages trafficking around the collectors market is false. Most comic art that was created prior to the mid sixties was simply destroyed by the publishers, considered by them as nothing more than waste once the printable films were made. 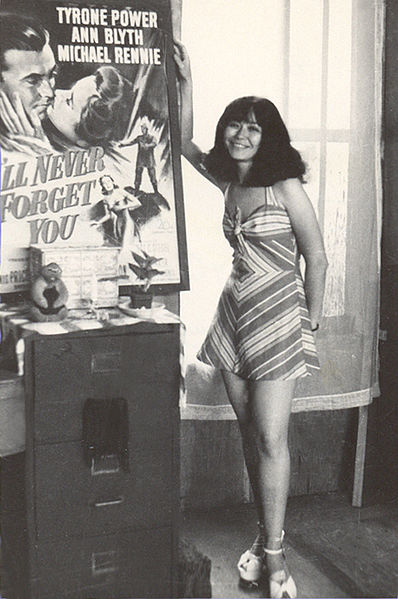 Flo Steinberg, secretary at Marvel during the early years of the ‘House of Ideas,’ was quoted in David Anthony Kraft’s COMICS INTERVIEW #17 saying, “We used to throw it out …when the pile got too full…it was like ‘old wood’ to us.” Likewise, there are stories of Neal Adams dashing across the office at DC to rescue original art that was about to be destroyed in a paper slicer! Any art that survived that slaughter was generally given away as gifts or just managed to filter its way out of the office as random souvenirs. The scary part is that most of the artists just accepted this practice as the norm!

By the late sixties when fandom started to prove that there was a secondary market for the art through the establishment of comic conventions and comic shops, artists began to demand that their art be returned. This was a tricky process since several people generally worked on any given issue. The art would be split up among the writer, penciler, inker, and even the letterer. Colorists usually would get back the color guides that they made for the color separator.  Because of this practice entire issues are nearly impossible to acquire.

By the 1980′s the independent movement gave creators many more rights and more creators were responsible for their work in its entirety but still, usually, would sell off pages at conventions, one at a time,  to support themselves economically. 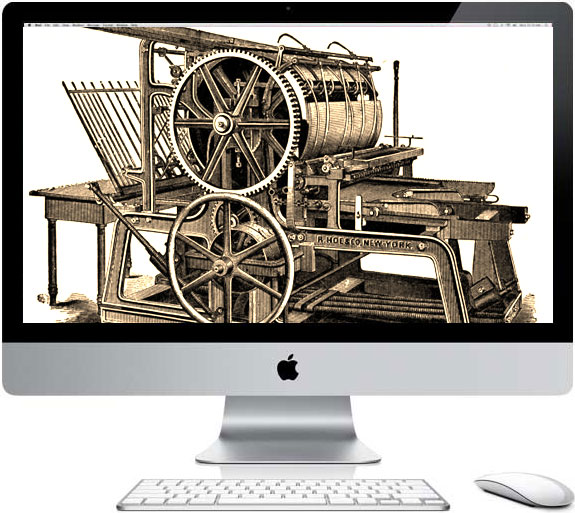 Today more and more comics are being created digitally and hard copy originals don’t even exist. The work and creative talent  that goes into creating a comics page is once again being trivialized as an unfortunate part of the process. Instead of ‘old wood’ it is now just a collection of magnetic data hogging up a hard drive, facing obsolescence with the next wave of new technology.

The printed version may remain as the only collectable hard copy of future comic works and even that is challenged by digital delivery of comics. The art of making comics is finally being recognized as something of value yet its new found respect is threatened with its own potentionally temporary creative process.

Criticize Lichtenstein as much as you’d like, but his copy of a single panel, swiped from a forgotten romance comic, will exist for a long, long time and will only become more valuable while the original line drawing it was lifted from has probably been trashed for fifty years. How can we come expect the art world, or anybody,  to respect comics as more than source material for pop art parodies when we continue to allow the originals it to be disposable.

Is comic art trash or treasure? As comic artists, we need to decide for ourselves.