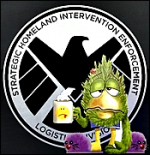 I’ve been down with what is either an incredibly horrible cold or what technically would be considered a mild flu since last Tuesday, although “mild” is definitely not in the eyes of the sufferer – achy and sore, exhausted just doing nothing but unable to sleep enough to wake up feeling like I slept, coughing up disgusting stuff from inside my chest, a nose that is either stuffed or running depending on the time of day, alternately hungry and nauseous in the same minute…

Anyway, my brain is definitely not completely “there” this week, but here are some thoughts.

So far not terrifically excited by Agents Of S.H.I.E.L.D. I thought the pilot episode was basically meh and if it wasn’t for the involvement of the combined powerhouse of the MCU (Marvel Cinematic Universe) and Joss Whedon it would never have been picked up by ABC, much less been given a full season of episodes. For one thing the new agents (meaning those we haven’t seen in the MCU) are too homogenously Hollywood; everybody is the same pretty face and body, as though the casting office went to the Paris and New York fashion shows instead of the theaters in their search for new talent. Note to ABC: Marvel’s universe is not DC’s universe. It’s built around imperfect people having imperfect lives, super powered or not. It wouldn’t have been a bad idea to hire a Melissa McCarthy or Kevin James as agents. Y’know, some imperfect people. Imperfect people who can… act.

But maybe I’m being too hard on a new show that has had the weight of high expectations around its neck like the proverbial albatross. Isn’t there anything I’ve liked about AOS?

I like that Lola has a little bit of DeLorean in her.

I like Sam Jackson showing up as Nick Fury and dressing down Phil Coulson (who is played by Clark Gregg.)

I liked seeing J. August Richards – Charles Gunn on Angel – on TV again, playing the manipulated and man-made superhero/supervillain of the pilot. Whedon has a good, no, great, eye for talent and he often hires and rehires actors he has worked with and brought to stardom…maybe we’ll be seeing other Wheedon “school” alumni on AOS? Alexis Denisoff – yes, I know he played “the Other” in The Avengers, but so what? – Elisha Dushku, Tom Lenk, Amy Acker, Gina Torres, Nathan Fillion….

Actually, those are the kind of actors I would have liked to see making up the Agents Of S.H.I.E.L.D on ABC, Tuesdays at 8 PM, EDT.

Still, the pretty faces of Hollywood might grow on me.