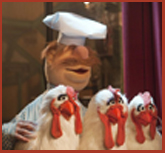 When I was back in college, a girl I was dating teasingly insisted that if I had to choose between her and a double chocolate cake I would have to think hard. “Nonsense, my dear,“ I told her, “You exaggerate. I would always choose you.” After a beat, I added, “With infinite regret for having lost that double chocolate cake.”

The relationship with that young lady did not last but my relationship with chocolate and, indeed, food in general certainly has. I’ve become a pretty good home cook over the past few years and I credit television for a lot of that.

I was not into cooking all that much for most of my life. Oh. I could feed myself and even – on occasion – make a really good meal. Then one day I was reading in the newspaper an article about a new show coming onto the Food Channel (which at that point I not only didn’t watch but disdained). It was Iron Chef (the original Japanese version) that was described as a cross between a cooking show and a sports event. Well, that intrigued me enough to sample it and, in short order, I was hooked. It was complete with play-by-play announcer, a field reporter, an analyst, and guest commentators who also were part of the judging committee.

It led me into sampling more of the Food Channel which in those days included Sarah Moulton, Mario Batali, as well as Rachel Ray and Bobby Flay until the Food Channel became one of the most frequent stops for me on the dial. I also started checking out some of the food shows on other channels such as PBS where I discovered America’s Test Kitchen and its sister show, Cook’s Country, which are my two favorites. Sarah Moulton eventually migrated over to PBS as well and there’s the indomitable Lidia Bastianich, the Italian cooking grandma who scares the bejabbers out of me. I would never cross Lidia. However, she’s a great cook, good teacher, and excellent communicator.

I’ve learned things from them over the years, especially America’s Test Kitchen, Cook’s Country, and Sarah Moulton. Tips around the kitchen, recipes, ways to prepare food and even how I think about food. I subscribe to some of the magazines and bought some of the cook books and, in general, have become a much better cook as a result.

Things have changed along the way, some not for the better, IMO. The Japanese producer took Iron Chef off the air. An American version followed, with William Shatner as The Chairman but it was (thankfully) aborted after only a few episodes. It was terrible. Food Network launched its own Iron Chef America and it’s been pretty good. A bit tamer than the Japanese version but very watchable.

The problem is that it also ushered in a generation of cooking competitions that now dominate the network. There are battles over cupcakes, you can get Chopped, there are even competitions to decide who will be the next Iron Chef (whose roster has grown from three to a bloated six or seven). To get a cooking show on Food Network you now have to survive a competition called Food Network Star. Only one winner – Guy Fieri – can honestly be said to have gone on to become a real Food Network Star. The others get a show that seems to last a season or two and they’re gone.

The competition shows so dominate Food Network that the parent corporation had to create a new channel, the Cooking Channel, to house the shows that actually are about cooking. Some of the best cooks who were teachers – Mario Batali and Sarah Moulton – left (or perhaps were forced out). I’m watching less of it.

I know on the regular networks they’re even doing a talk/food show called The Chew. It sometimes has Mario Batali or Iron Chef Michael Symon on it, both of whom I enjoy, and I’ve tried watching it sometimes during my daily lunch break but, in general, I find it unwatchable. I know Rachel Ray has also gotten a syndicated talk show on which she also does some cooking but she’s not a great interviewer. If I want that kind of show (and I don’t often) I’ll watch Ellen.

I’ve watched a fair amount of Gordon Ramsey’s Kitchen Nightmares. It’s formula – Ramsey is asked to come in and help a struggling restaurant, he finds food, décor, and/or sanitary conditions deplorable, hollers and berates everyone in sight, makes things better, and leaves somewhat akin to a surly Scottish Lone Ranger. I mostly enjoy it even though I learn nothing and it’s successful enough to have spawned a rip-off imitation on Food Network and about a bajillion other Ramsey starring shows. You cannot watch all the shows Gordon Ramsey does and have any sort of real life. It would just take up too much of the day. He’ll probably have his own cooking channel shortly – all Gordon Ramsey, all the time. I suspect his ego would like that.

For me, it’s about the food, and can a show make me learn something new or does it make me want to run out and cook. My Mary and I saw one of Julia Child’s later cooking shows when she was in a kitchen with her friend, Jaques Pepin, and they were making hamburgers. They concocted what they considered to be the quintessential hamburger. It got us drooling so much that we ran out to find a place that served good hamburgers. What we got wasn’t on the scale of Julia and Jaques’ but we had to have a burger – any burger. That’s how well Julia communicated and why she was the Master Chef of television. Gawd, just remembering it is making me drool some more.

Excuse me, I’ve gotta go find something to eat.