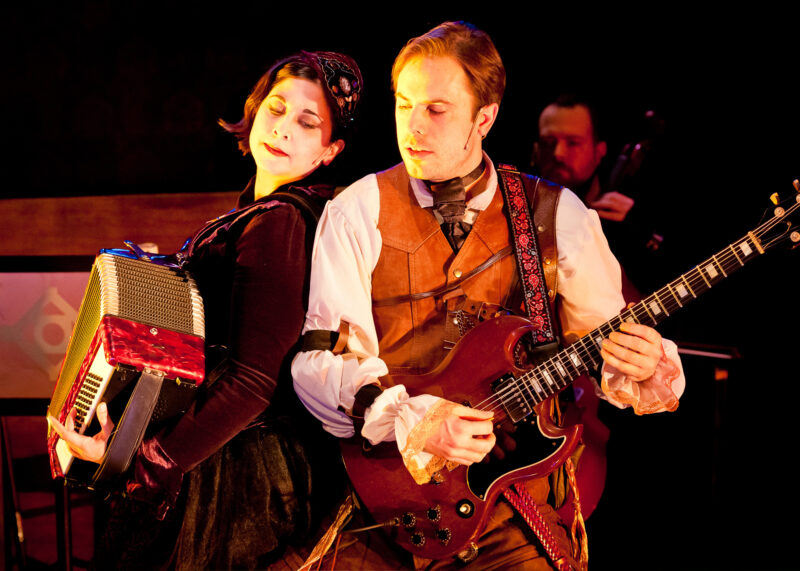 What do you get when you take a dystopian who-done-it, three suspects, a composer-soprano-instrumentalist-victim, set it to music that is part Baroque opera, tango, Hindustani classical, and hip-hop, add multimedia elements (including a projected big, singing head and funky fake commercials for deadly fashion accessories and wacked-out news broadcasts), dress it all up in steampunk sensibilities reminiscent of Watchmen, include a bailiff ringmaster of a TV show (The Whole Truth) that would make Tim Curry’s Frank-N-Furter proud, add Rocky Horror-like audience participation, a libretto written by the composer with director Rob Reese, and swirl in six avant-garde new music veteran musicians-singers-actors a la the most recently retooled Sweeney Todd?

This is the hybrid lovely beast that is Kamala Sankaram’s Miranda, which opened in preview (tickets $20, 9 p.m.) on Thurs. Jan. 12th, opened on Friday the 13th, and makes its final performance on the 21st as part of HERE’s 3-year composer-development HARP (HERE Artists Residency) Program. Grandly ironic sensibilities. And it lived up to all its promises despite a few technical nits.

Jerry Miller as the Bailiff plays it larger than life—he sells it, with power, and controls the audience with aplomb: a bravura performance. Sankaram is a soprano worthy of Puccini, in demeanor and vocal timber and skill, plus able to carry her ethnic classical tropes with equal grace, yet still be convincing in the more contemporary milieu of the infectiously heavy hip-hop grooves of the show’s theme she writes for her mini-orchestra (guitar, cello, violin, tenor sax/clarinet, bari sax/bass clarinet, accordion—it needs a viola to round out the dark tones and support the violin and guitar—but I am a violist). Sankaram’s writing is lush, inventive, and dramatic, seamlessly slipping between the genres, and the staging, choreography, and projected imagery do it justice in the appropriately dark and industrial HERE main theatre (holds 100, capacity crowd). Her portrayal of the poor-little-rich girl is at once ditzy (when she speaks) and noble (when she sings), highlighting the dichotomies of her character and her struggles, once she discovers a wrong that shatters her protective bubble, to Do The Right Thing. She and Miller are the stand-outs of this production, along with the behind-the-scenes artists. The other voices: Muchmore’s reedy tenor, Fand’s mezzo, Fleming’s baritone, and those of the supporting cast sung by the multi-winds, were serviceable and had moments.

The multi-wind players, Rosenberg and Hudgins, really drove the show’s musical colours and grooves and gave things the gravitas they needed when they needed it. Fleming’s use of a classic Gibson SG led me to keep expecting a fat sound, which he played hide-n-seek with. Fand’s violin playing was great for riffs and in tutti forte passages, and she navigated the treacherous and florid chromatic tonalities of the Hindustani passages quite well, but her intonation when solo and exposed, especially in unison with the singer, wandered, which makes me wonder if there are monitor problems (string player can’t hear = instant intonation woes). Muchmore was…well…much more sure-footed on his cello’s fingerboard in technical passages, though his crunchy sound that was perfect for the grooves was too rough in parts compared to the beauty of tone of Sankaram’s voice at all times. The climax of the show is that the audience must convict the fiancé, the mother, or the father (written in two brilliant trios at the opening and closing of this 80-min. through-composed piece), after having viewed the evidence, in vignettes, which they can either “affirm” or “deny” as official evidence. The audience consisted of the Steampunk crowd in all their finery and the über-Hipsters of the avant garde theatre and new music crowd (Bang on a Can vintage…of which Sankaram is an alum).

This night they convicted “mom” —but in this warped society, the twist is that all artists, in order to earn their keep in society, serve as paid proxies for wealthy defendants on this TV court show reminiscent of The Running Man, in a judicial system gone mad. As a jurist, it made me profoundly uncomfortable to speak my part, as I hope was the composer’s intent. But the rest of my audiencial cohorts seemed to have no such misgivings and spoke with great enthusiasm (Roman mob? Jerry Springer?). The only flaw in the show’s writing that I found was that, with what was presented, I was not convinced that any of the suspects were guilty—though I was very sure that no one was innocent…but we were not given a not-guilty option—and that would’ve deprived us of the pathos of the pleading, struggling non-defendant before their absurd and brutally unjust death (the government’s refrain: “You signed a paper!”).  This show is horrifically very well done, well worth seeing, hearing, experiencing, and being a part of.  Affirm or Deny it for yourselves!