REVIEW: Superman vs. the Elite 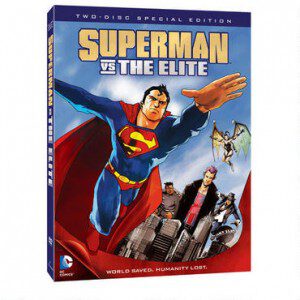 In the 1940s, Jerry Siegel and Joe Shuster produced a two-pager for Life that showed if the Man of Steel were alive, he’d grab Hitler and Mussolini and bring them to justice, saving countless millions of lives. A nice bit of wish fulfillment during World War II.

In the 1970s, comic book writers began exploring what it really means to have someone as powerful as Superman operating in a world much like ours. Writer Elliot S! Maggin was among the first to bring up this theme more than once and was followed in subsequent years by a variety of others, reflecting the different perspectives of the creators and tastes of the audiences.

Just in time for Action Comics’ 775th issue in 2001, Joe Kelly became the latest writer to tackle the concept. After all, the world’s problems — ethnic strife, religious warriors, belligerent regimes, and destruction of the eco-system – could be easily handled by someone with the powers and abilities far beyond those of mortal men. But, does any one person be he human or Kryptonian actually have the right to impose a singular will on billions? As the problems appear to multiple, the need for a simpler solution can be awfully appealing.

Enter the powerful telepath Manchester Black. Accompanied by three others, his Elite appeared to be the heroes a stressed world population desired, offering a clear alternative to the hands-off employed by the World’s Greatest Super-Hero. With Doug Mahnke’s powerful artwork, the story was a nice, modern day take on the recurring theme.

Now, Kelly has adapted that well-regarded story into a 72-minute animated film, the latest from Warner Premiere’s direct-to-video series based on the DC Universe. Superman vs. the Elite, coming Tuesday, breezily handles the themes with heavy doses of action and wanton destruction. The film more or less follows the comic although there are changes for the format including the early appearance of Dr. Light to show this is a DCU tale. The Atomic Skull is also used as the recurring threat that practically begs for an ultimate solution and is a nice thread carried through the tale.

The story moves well, thanks to director Michael Chang who demonstrated a great facility for action with the wonderful Batman: The Brave and the Bold. And for a change, I found the score, from Robert J. Kral, to be exceptionally good. I tend not to notice the animated scores but this one stood out which is more than I can say for the lousy character design work. For a story based on the ultra-realistic work from Mahnke, this is overly cartoony for the subject matter. Superman looks like he has a broken nose and every character, save Lois Lane, is just too cartoony for their own good. For some unknown reason, the producers seem to think they need to redesign the look of the characters for each feature, a decision I strongly disagree with.

A saving grace, though, is the dialogue. The characters demonstrate real personality with affection, snark, humor, and a distinct point of view and it makes me miss Kelly’s work on mainstream superheroics. As delivered by George Newbern and Pauley Parrette, you feel the love that binds Superman and Lois. Robin Atkin Downes as Black and Melissa Disney as Menagerie are also terrific.

In a world where Superman is the premier hero, but not the sole super-powered figure, the arguments on the central theme is incomplete. At one point he says to Lois that Black targeted him alone, obviously because he was first and is the most powerful of the bunch, but it’s a discussion that should be held between the JLA (representing the full heroic community) and the world, maybe via the United Nations. As a result, the final arguments between Superman and the angry, power-mad Black fall flat and feel incomplete.

The animated adventure comes complete with the usual assortment of extras, although I’ve come to miss the DC Showcase shorts, often better than the lead feature. The commentary from Kelly and Eddie Berganza, the editor of the original story, is interesting, especially when Berganza questions Kelly about some of the choices he made in writing the animated script. There’s a 15 minute as Kelly discusses the Elite’s in-print appearances which is vaguely interesting but also incomplete as it doesn’t really give you a sense of their flash-in-the-pan role in the DCU (in fact, the two volumes collecting their Justice League Elite maxiseries are currently out of print). A variety of talking heads, including a soldier, academics, and animation exec Mike Carlin also explore the themes raised by the story, making for an interesting, if a little dry, featurette. The original comic is on hand in digital form although it’s a little tough to read and navigate but it reminds me of how powerful the art was, emphasizing the story’s point. Finally, there are some selected Superman Adventure cartoons from producer Alan Burnett and a 15 minute preview of this fall’s The Dark Knight Returns Part 1. Given the timing, it’s interesting to see a photo gallery for next month’s The Dark Knight Rises but no trailer for it.

Overall, this is an above average offering, the fourteenth from Warner Animation, and makes for entertaining viewing. The distracting character designs should be forgiven since it tells a story with a strong narrative point of view, something missing from too many of the others.