KING OF THE OUTBACK COMES OUT SWINGING FROM FIGHT CARD! 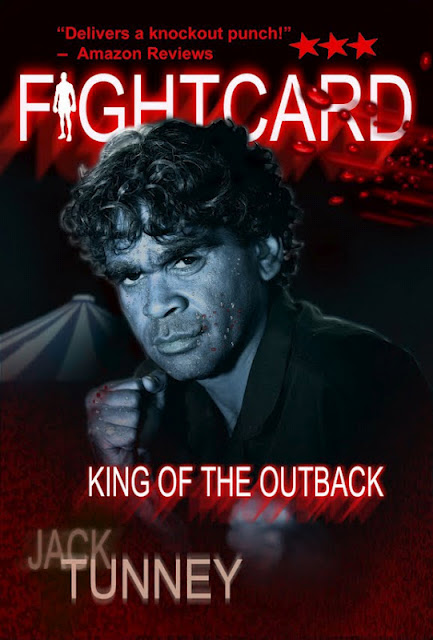 From Fight Card-
We’re extremely excited about this month’s fight card entry, King Of The Outback from Australian author david foster (writing as Jack Tunney), as it is the first Fight Card novel with an international setting.  Containing the same great characters and fistic pulp action readers have come to expect from the Fight Card series, king of the outback, transports us to a harsh 1950’s Australian landscape – where the fists are as tough as the land and the times, yet humor and compassion can still be found.  If you are new to the Fight Card series, King Of The Outback is a great place to start before going back to catch up on all the other great Fight Card tales . . . In the months to come, look for more hard-punching Fight Card novels, set both back home in the USA and internationally … Fight Card: King Of The Outback delivers a knockout punch!
FIGHT CARD: KING OF THE OUTBACK
Outback Australia 1954
Two rival tent boxing troupes clash over a territorial dispute in the Outback town of Birdsville. In the sweltering heat, tensions simmer, tempers flare, and as things reach boiling point, a boxing tent is burned to the ground.
Fighting men know only one way to solve their disputes, and that’s in the ring. The solution, a show-down, smack-down, winner take all bout between the two rival outfits.
In the blue corner, representing ‘Walter Wheeler’s Boxing Sideshow’ is Tommy King, a young aboriginal boxer with a big heart and iron fists.
In the red corner, representing ‘Arnold Sanderson’s Boxing Show’, is ‘Jumpin’ Jack Douglas, a monstrous wrecking machine from the city – a man who’ll do anything to win.
The fight – brutal. In the world of Tent Boxing, in the harsh Australian Outback, weight divisions and rules don’t count for much. It’s a fight to decide, who is indeed, King of the Outback!
Share