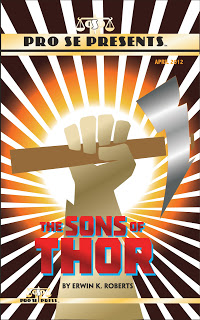 Pro Se Productions, a New Pulp Publisher noted for bringing monthly Pulp magazines into the modern era, releases today its latest issue of its award winning magazine, PRO SE PRESENTS!  The ninth issue of this New Pulp periodical features the first half of an epic new adventure set in the classic era of the Pulps featuring a mix of new characters as well as fantastic original Pulp characters that are now in the Public Domain!
THE SONS OF THOR by noted New Pulp Author Erwin K. Roberts is so much of an epic that it will consume TWO full issues of Pro Se Presents.   Beginning with Issue 9 and finishing in Issue Ten at the end of May, this story looks at the prospect of the villains of a tale being as strong as the heroes who stand against them!
They are a legend told in fearful whispers- A terror generations old…
They believed that they were the chosen of the old Norse Gods.  They could not fail unless someone touched by another pantheon of gods intervened.  To this end, they trained themselves and their families to such extremes that even the ancient Spartans would have been appalled.
They believed they would rule first all of Europe, then the entire world.  We thought the sect gone forever.
We were wrong.  The Sons of Thor live!
Heaven Help the Foolish Few Who Dare to Challenge THE SONS OF THOR!
Available now at www.amazon.comand www.prosepulp.com for $6.00 in print! Also available as an ebook from Amazon, Barnes & Noble and www.smashwords.com for $1.99.  Featuring Cover art and design by Sean Ali and Ebook formatting by Russ Anderson! Edited by Don Thomas and Lee Houston, Jr.!
Pro Se Presents #9 Featuring THE SONS OF THOR Part One by Erwin K. Roberts!
For more information on Pro Se, go to www.prosepulp.com!
Share