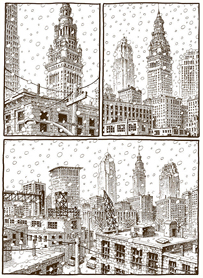 The Avengers opens today. As near as I can tell from the Internets, I’m the last person in the world to see it. The New York Daily News reviewed it on Monday, since apparently everyone in the city has the option of going to a screening.

I hope to catch it this weekend, like a rube from the sticks.

Which brings me to the graphic story that has me most excited right now. Harvey Pekar’s Cleveland. Written by Harvey with fantastic art by Joseph Memnant, was just published by ZIP in collaboration with Top Shelf.

Cleveland, Ohio is a large, midwestern city, and, like many large midwestern cities, is a shadow of its former self. Unlike Chicago, it is not the City of Big Shoulders, nor is it the Hog Butcher of the World. It’s not like San Francisco, Miami or New York, a portal to the international scene. Cleveland is kind of schlubby, most famous these days for the fact that the Cuyahoga River caught fire… over a dozen times.

To me, Cleveland was the Big City. Growing up in Youngstown (about an hour and a half away), Cleveland to me was a place that was big where my town was small: the airport, the art museum, the library, the department stores. My father’s work took him more often to Pittsburgh (also about an hour and a half away), and he liked the Pirates and the Steelers. My mother liked the shopping better in Pittsburgh.

Pekar loved Cleveland for some of these reasons, and more. It’s his hometown, where he grew up and worked and married. He revels in the seemingly contradictory traditions of progressive politics, union membership, and racism.

The mix of history and personal reminiscence is both seamless and magical. Reading this book, you feel Cleveland as a place, not just a spot on a map, but a city where people live and work, dream and comfort each other. You root for the mass-transit system and the used book stores.

I was lucky enough to meet Harvey a few times, although never in Cleveland. I don’t have that chance anymore. Still, there’s a chance we might be able to keep more than his spirit in the city he loved. If you haven’t chipped in on this project, think about it. I’m told they could use more money.