[EDITOR’S NOTE: In last week’s edition of ComicMix Six, we told you why the Skrulls’ "Secret Invasion" probably isn’t worth losing sleep over, given our list of the worst moments in Skrull invasion history. This week, we’re playing in the sandbox of big events yet again, with a list of reasons why Marvel’s recent  Civil War event doesn’t stack up against one of its popular predecessors, the 1984 series Marvel Super Heroes Secret Wars. -RM]

Just over a year ago, Marvel shook up their universe with Civil War, a series-spanning event wherein the U.S. government decided, after a tragic accident involving super-powered heroes and villains, that anyone with superhuman powers would be required to register and become official federal operatives. Costumed crime-fighters picked sides, Marvel picked a slogan ("Whose Side Are You On?"), Spider-Man unmasked, and Iron Man’s pro-registration camp hunted down the anti-registration crowd led by Captain America. In the end, Cap tearfully surrendered, only to be "killed" for his troubles a few issues later.

Throughout the series’ seven issue (and countless tie-ins), the Merry Marvel Marketing team hailed Civil War as the most mind-blowing storyline since, well… ever.

Here at ComicMix, we’re not quite sure we agree. After re-reading Civil War and comparing it to one of the first epic Marvel crossover events, the ’80s action-fest Marvel Super Heroes Secret Wars, there’s a good argument to be made for the superiority of the earlier project.

Oh, and remember, what’s being discussed here is the 12-issue Secret Wars series, published by Marvel in 1984 (and featuring the first appearance of Spider-Man’s famous black costume), not to be confused with Secret War, the 2004-2005 five-issue series written by Brian Bendis.

Got it? Good. Now let’s begin…

6. REMEMBERING THE LESSONS ‘SESAME STREET’ TAUGHT THEM: In Civil War, heroes who fought alongside each other for years decide that the best way to debate the merits of a new law is to spy on one another and brawl at each and every opportunity. In Secret Wars, heroes who don’t necessarily trust each other decide that, despite their differences, teamwork and cooperation will improve their situation.

Sure, Spider-Man had a skirmish with the X-Men and the Hulk was shouting at everyone, but they still came together in the end. Wolverine and Captain America shared a heart-to-heart, and the heroes even accepted Magneto’s help, knowing that the greater good was more important than issues of mistrust.

5. FEMALES, FRONT AND CENTER: In Civil War, female characters like Storm were content to let Black Panther and other male superheroes get their hands dirty and have the spotlight.

In Secret Wars, Storm demands to be recognized as leader of the X-Men even though Cyclops and Professor Xavier are both around with their own opinions. Rather than back off from an opponent in order to let a man handle it for her, she chooses to tell off Prof. X for undermining her authority and then charges into battle, showing everyone why she’s a force to be reckoned with.

4. THE TALE OF THE TRASH-TALK TAPE: In Civil War, a silent, somber cyborg-clone of Thor goes around killing heroes until he’s eventually stopped by Hercules. (Imagine the villainous machine from Terminator without all of the snappy dialogue.)

In Secret Wars, the real Thor takes down several supervillains at once while proclaiming, "Thy touch OFFENDS me!"

It takes a real man’s man to shout a line like that during a life-and-death battle and not come out looking like a bit of a priss.

3. FEELING HOT, HOT, HOT: In Civil War, the Human Torch’s biggest moments involved being beaten into a coma by civilians and dying his hair.

In Secret Wars, the Human Torch showed up the Avengers by defeating the mass-murdering robot Ultron all by his lonesome and hooking up with an alien girl who didn’t mind that they didn’t speak the same language. Boo-yah! 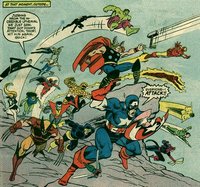 2. MAKING THE BEST OF A BAD SITUATION: In Civil War, no one smiles… ever. This is because, apparently, readers need to be shown that the situation is that intense. It’s like an episode of 24, and everyone is Jack Bauer.

In Secret Wars, despite the fact that they are facing possible death on a planet far away from home at the hands of a god-like being, Thing and Hawkeye remember the value of taking time to laugh. At one point in the series, they convince the villains Klaw and Lizard that, instead of fighting, it would be so much better to settle their differences over a game of patty-cake.

1. STAND TALL, SUPER-SOLDIER!: In Secret Wars, even after his shield gets broken and the heroes are at their lowest, Captain America doesn’t cry.

Instead, he simply decides to kick more ass!

Alan Kistler has also beaten Ultron (albeit in ultimate frisbee). He has been recognized by Warner Bros. Pictures as a comic book historian and can be seen in the special features sections of the Adventures of Aquaman and Justice League: New Frontier DVDs. He really wishes Marvel, DC or the kind folks at Doctor Who would realize he has some fun story ideas to share with them. His personal website can be found at: www.KistlerUniverse.com.

You can find new editions of ComicMix Six every week here at ComicMix. Have a suggestion for a list you’d like to see us take on? Want to let us know why we’re wrong? Post your comments at the end of this article!