Mike Gold Is Such A Tease! 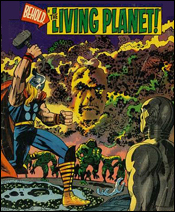 All of a sudden I find myself in the midst of a half-dozen publishing projects. All are comics, and all but one are comics stories.

Well, no. That’s why I call my ego The Hulk. That’s why, when Jack Kirby came up with an entire living planet named Ego (Thor #132, cover-dated September 1966), I identified like crazy.

There’s another reason. These deals haven’t been papered yet. “Papered” is high-falutin’ dealmaker speak for “signed contract” or “signed letter of agreement,” which are the same thing. Anyway, any or all of them can still collapse. That happens all the time.

So my ego is so big I’m telling you these deals are happening even though they haven’t been papered yet. Of course, having a signed deal is no guarantee that a project will ever start, let alone be released. If you took all the development proposals, all the unreleased master tapes both audio and video, all the edited film footage and laid ‘em all end to end, it would stretch from the San Diego convention center all the way to Ego The Living Planet.

So you’ll forgive me if I’m a bit excited. I’ll be working with friends old and new, including at least seven folks who are currently involved with ComicMix. There is no greater pleasure (with my clothes on) than doing creative work with good friends. People whose talent I can count on and the readers enjoy. People whose work habits are compatible with mine and vice versa. People I can call at 2 AM if they’re late on a deadline.

True story. Back when I was working at DC Comics in New York, I made an emergency trip to Chicago to be there for my father during his surgery. Of course there was nothing I could do during the surgery itself, but I was a ten-minute drive away from a freelancer who was almost a month late on a deadline. I borrowed my father’s car – hell, he wasn’t using it – and drove to said freelancer’s apartment. He wasn’t home, so I bribed the building superintendent into letting me in. I took a sheet of art board and scrawled in red marker “HEY! WHERE THE HELL ARE YOU! YOU’RE LATE! I BETTER HAVE THE PAGES ON MY DESK BY MONDAY! Love, Mike Gold.” I taped it to his drawing table and then I returned to the hospital, stopping only for an Italian beef sandwich. Yes, I had those pages on my desk by Monday.

So pay attention and you’ll hear about all this stuff. I hope. Actually, we teased a couple of them at the C2E2 convention last week, so if you were there you can easily connect some of the dots. And I should be in San Diego annoying the masses with all this as well.

Huckstering is an intrinsic part of our popular culture. But I pride myself in my inherently total lack of common sense to promote nothing by name… and to do so months in advance.

Yeah, that’s how excited I am.