If I rebooted Aquaman

For at least a summer, Aquaman was my favorite comic. It was the only comic I subscribed to, and the only reason I stopped subscribing was because as I was such a fanboy that I wanted to be able to pick out the best copy of each issue from the spinner.
I loved everything about Aquaman. I loved his weird underwater world. I loved his relationship with Mera, his girlfriend and then wife who could do everything he could, and could manipulate water as well. I loved his orange and green costume with the scales. I loved his conflict with his half-brother.
Okay, I didn’t love his sidekick, Aquaboy in his stupid shorts. But annoying teen sidekicks were the price of DC superheroics.
So, what would I change?
Make him Polynesian. 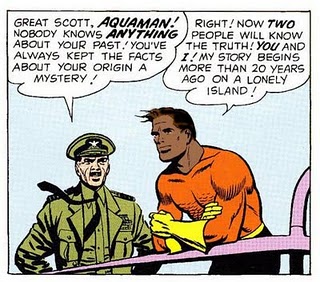 Aquaman and Green Arrow appeared at the same time, in More Fun Comics #73 (Nov.1941). Like DC’s Big Three, they slid from the Golden Age into the Silver with few physical changes: Green Arrow was briefly a brunet; Aquaman’s gloves were often yellow before they settled on green.
This is the Aquaman DC is rebooting: 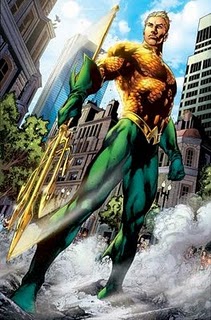 I don’t mind the neckline, though I prefer the boatneck collar of the ’40s and ’50s. But the trident is just a stupid thing to have to carry around. If you want to give Aquaman a gimmick, give him a harpoon gun.
Also, ditch the gloves. He doesn’t have a secret identity or any reason to protect his hands.
Here’s an early appearance of Mera: 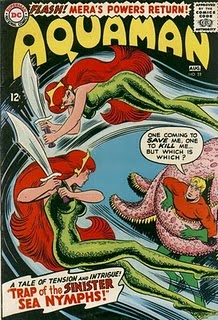 I wouldn’t change a thing about her. Superhero comics could use an interracial marriage. If you have to give someone a trident, let it be hers.
Aquaboy? Aquagirl? Heroes should be unique. Forget them, and Topo the Octopus too.
PS. I don’t know how many Aryan heroes DC needs, but really, they can spare a few blond guys.
Share