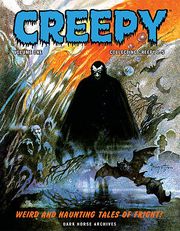 Pretty soon, this is going to turn into a review of Dark Horse’s [[[Creepy Archives Volume 1]]]. Hang in there; I’ll get to it, I promise.

I miss Archie Goodwin, particularly this time of year. He died 10 years ago from cancer at the ridiculously young age of 60. He was one of the best writers this medium has ever seen. In a field that sports the talents of Harvey Kurtzman, Will Eisner, Jules Feiffer, and Dennis O’Neil, Archie was of that highest caliber. If Archie ghosted bible tracks for Jack Chick, I would have read them. He was that good.

As a human being, he was even better. A life-long EC Comics fan (you could see it in his work, as well as in those with whom he chose to associate), for a couple years Archie and I had adjoining offices at DC Comics. We used to go out to lunch and talk about, oh, [[[Tales From The Crypt]]] and Ronald Reagan. Did I mention Archie was very politically aware? Read his [[[Blazing Combat]]] stories. Anyway, sometimes our conversations scared the Manhattan businessmen who sat near us.

Archie enjoyed that. I enjoyed those conversations immensely; I wish I could relive them.

So why do miss Archie “particularly this time of year”? This is convention season. No matter where we were, we would run into each other a couple times each year at various airport gates. He could be leaving from New York and I from Chicago and we’d run into each other on connecting flights in Denver. We could both be at a show in, oh, his native Kansas City and we could be flying to two different places, but we’d still share the first leg of our respective flights. At first it was uncanny; quickly, it became another fact of life.

I haven’t met all 6,500,000,000 people on this planet, but based upon my unscientific sampling I can state with complete confidence that there are few people with greater wit, charm, and intelligence. So there.

This brings us to Dark Horse’s Creepy Archives Volume 1. Archie started writing for Jim Warren’s Creepy with the first issue; by issue two he was story editor and issue four he was the sole credited editor. He wrote most of the stories and, therefore, did a lot to define the 1960s horror story while working with a lot of EC greats like Reed Crandall, Jack Davis, Al Williamson, Alex Toth, George Evans, Joe Orlando, Wally Wood and Frank Frazetta. As time progressed, he added younger talent like Gray Morrow, Neal Adams, and Steve Ditko.

I take a backseat to no one in my admiration for EC Comics, and I’ve spent a fortune over the years on Russ Cochran’s deeply-appreciated efforts to archive the line. But the horror stuff was among my least favorite – I preferred (in order) [[[Mad]]], the war line, the science fiction line, and the SuspenStories. [[[Doc Savage]]] creator Lester Dent is widely known for having said there were only seven plots in all of fiction. If that’s true (and it might be), there are, at best, only three in horror… until Archie came along with [[[Creepy]]] and [[[Eerie]]].

The book is the same size as Cochran’s EC Archives but, of course, in black and white. I don’t think the stuff was shot from the original art like most of Cochran’s work and some of the fine lines and wash tones break up a bit, but actually it looks better than the original Warren Publishing magazines that were printed on good old fashioned pulp wood, the way real comics are printed.

A few of Warren’s “Captain Company” ads round out the tome. I wish they left the prices in; I’d like to track what 45 years of inflation has done to the price of your 10-foot inflatable rubber snake. Jon B. Cooke, of [[[Comic Book Artist]]] magazine fame, contributes his usual first-rate introduction.

One aside. I first saw publisher Jim Warren at Phil Seuling’s 1969 New York Comicon. He delivered the keynote speech where he disclosed how newsstand distribution really works. That was one of the most educational afternoons I had the privilege of enjoying in my life. I told him so a couple weeks ago at the San Diego Comic-Con, which was the first time I had a chance to meet him. We talked at the ComicMix booth for about 20 minutes; I had great fun (we avoided politics) and was honored to meet the man.

Creepy Archives Volume 1 is a fitting tribute to Archie and Jim and all the extraordinarily talented people who joined their effort. It’s available at your friendly neighborhood comics shop and with the usual suspects.