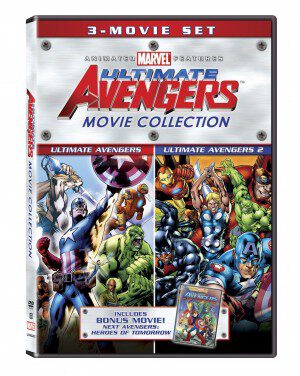 As you might imagine, studios are combing their libraries to find related items to reissue to tie in with the frenzy surrounding the May 3 opening of The Avengers. Coming Tuesday are two more discs that come closest to the feature film, a sextet of Marvel Animation films in two sets. Making their Blu-ray debut, the first set is Ultimate Avengers Movie Collection which contains the two animated films based on the successful Ultimates comic, along with the bonus film Next Avengers: Heroes of Tomorrow. The other Blu-ray set is merely dubbed Marvel Animated Features and contains Planet Hulk, Invincible Iron Man, and Doctor Strange.

Both Ultimate films pretty closely follow the initial Ultimates arcs from Mark Millar and Bryan Hitch although the script is better at aping Millar than the animation is following Hitch’s naturalistic style. A significant change is that Tony Stark’s identity remains a secret and his tried and true heart issues remain an element as opposed to the Ultimate Universe’s brain tumor affliction – an odd choice but one that doesn’t spoil the fun. He reluctantly joins the team in the first film while he dons the War Machine armor in the second.

The heart and soul of the films remains Captain America (Justin Gross), the solider recently freed from a decades-long nap and slowly adjusting to a world that staggers his imagination daily.

It should be noted that the Joss Whedon film features the Chitauri, who are from this first storyline so the timing is especially apt. They threaten Earth in both films with the latter also being the vehicle to introduce us to the Ultimate version of T’Challa, the Black Panther (Jeffrey D. Sams). 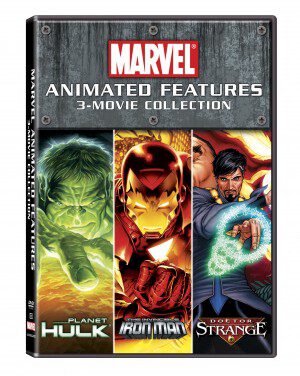 The fifth in the film line, Next Avengers: Heroes of Tomorrow, came out in 2008 and has no resemblance to the superior Allan Heinberg but hews closer to the A-Next title as a part of MC2 line of potential future stories. This posits a world ruled by Ultron (Tom Kane) with most of its powerful champions dead. Iron Man is ordered by Captain America to take their children into hiding so we meet James Rogers (Noah C. Crawford), son of Cap and the Black Widow, Henry Pym Jr. (Aidan Drummond), Azari (Dempsey M. Pappion), son of the Black Panther, Torunn (Brenna O’Brien), scion of Thor and Sif. Stark trains them for a dozen years while the world suffers. When James accidentally activates the Iron Avengers, robotic replicas of Earth’s Mightiest Heroes, they follow their programming to attack Ultron, who gains control over them. It then falls to the next generation of champions, which also comes to include Francis Barton (Adrian Petriw), son of Hawkeye and Mockingbird.

Some nice ideas but the junior heroes are flat without much spark to their characterization and dialogue.

The individual films comprising the second set are uneven. Planet Hulk, which we previously reviewed, is a nice adaptation of Greg Pak’s sprawling story. Invincible Iron Man inexplicably alters his origin story so he builds the first armor in China, aided by James Rhodes (Rodney Saulsberry). The Big Bad is Kahgan, the latest incarnation of The Mandarin, whose resurrection is sought by four powerful elementals. Shellhead has to prevent the vile man’s return and keep the world safe. It’s unevenly paced and takes elements from the live-action film, the Marvel Universe and Ultimate Universe versions so it’s a real mixed bag.

Interestingly Marc Worden voices Stark/Iron Man in five of the six movies but doesn’t resonate the same way Kevin Conroy does as the animated Batman. The second Ultimates film uses Dwight Schultz, Mark Hamill and Chi McBride and having them helps the movie tremendously. As always, the vocal casting robs the films of their strength, a consistent deficiency that they seem resistant to fixing.

Given the speculation that the Sorcerer Supreme is a likely candidate for the 2014 opening day slot Marvel has reserved, it’s nice to have this animated feature back in circulation because it does a pretty good job modernizing Stephen Strange (Bryce Johnson), arrogant medical practitioner turned penitent student of the Ancient One (Michael Yama). Marvels’ fourth animated feature, they’ve clearly gotten a handle on the adaptation process and sustaining a story for 95 minutes (actually the longest of the bunch). There are significant alterations such as the role of Wong (Paul Nakauchi) and first appearances of Baron Mordo (Kevin Michael Richardson) and the dread Dormammu (Jonathan Adams) but they work. It’s not perfect with a meandering middle and rushed climax but it’s better than a lot of the other Marvel  animated movies.