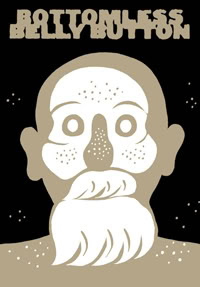 Dash Shaw has a strange habit of defining things, of explaining all the elements of his world in minute detail.

In his new 700-plus page graphic novel Bottomless Belly Button

(Fantagraphics, $29.99), that microscopic focus takes on monumental scope as Shaw relates the foibles and piccadiloes of the Loony family when the patriarch and matriarch announce a divorce after decades of marriage.

The family (the parents, their three children, one spouse, two grandchildren) gather at the family’s beach house, and Shaw begins by explaining “there are many types of sand” before giving an eight-page summary of these types.

We’re then introduced to the family through a sequence of diagrams, charts and vignettes, quickly establishing their characters and relationship dynamics. In short, their behavior is befitting of their name.

Shaw told me recently that he uses such definitions to orient readers, and from this point [[[Bottomless Belly Button]]] truly takes off in a story that mirrors The Squid and the Whale

while never falling into that film’s cold, intellectual trappings.

At the center of the story is the divorce, which brings the characters together, yet it isn’t the driving force. Shaw refuses to even address the actual cause of the split or even much explore the parents’ motivations.

Instead, the divorce is simply an entry point, an angle with which to view the three Loony children and their families. We understand each through how they respond to the divorce, each fascinating in the emotionally truthful way Shaw describes them.

For elder son Dennis, it becomes a mission of understanding the split, and his hunt for answers becomes feverish and haunting before eventually reflecting that old truth, that we search for answers to problems in the lives of others in order to avoid the problems in our own.

The characters, illustrated in a stripped-down expressive style, are only similar in how they all struggle with self image, though none more than younger son Peter, who is drawn as a frog (which is how he sees himself). Shaw called the book a collection of fictional autobiographies, each character telling his or her own story.

It is that and much more, a slow-paced family story that rises above the dull tales of ennui that so many indie comics drift into. It reads like cultural anthropology, so convincing and fascinating are Shaw’s characters.

And so, even after more than 700 pages, we’re sorry to see them go.