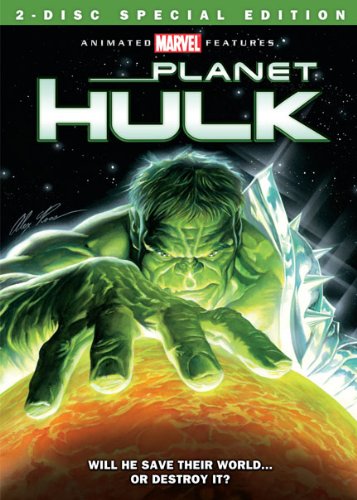 When Greg Pak received his dream assignment, writing the [[[Hulk,]]] he was handed a few notions that Marvel’s editorial team conjured up, starting with exiling him from Earth. From there, Pak spun the Planet Hulk

epic which was the first the jade-jawed giant was allowed to cut loose in years.

Exiled to space by the Illuminati, the Hulk crashed on an alien world and suddenly was surrounded with assorted aliens who could give as well as he could. Enslaved, he suddenly was an underdog, just another mongrel to fight for the rulers’ pleasure in the gladiator games. Seeing no Banner and all-Hulk helped make this a standout adventure.

Yeah, its [[[Spartacus]]] to a degree, but seeing the Hulk in chains then in armor was cool. It made sense to ship him off Earth to spare humanity and we all knew he’d be back and there’d be some serious payback involved. But first, he had to survive.

The story was engaging and ripe for adaptation as part of Marvel Animation’s series of animated features for Lionsgate Home Entertainment. The highly promoted event arrived in stores this week. In 81 brisk minutes, the story is boiled down by Greg Johnson and streamlined, bringing this to a satisfying closing point (and leaving room to finish the adaptation in a sequel).

On the other hand, Johnson spoils Pak’s work by writing flat characters and providing everyone with stilted and trite dialogue. For legal reasons, the Silver Surfer couldn’t be used and rather than drop the moment, he’s replaced with Beta Ray Bill but also means there’s a flashback setting up Bill that doesn’t add anything to the tale and tells us nothing about Bill. It’s pretty but pointless, taking away from the main story.

The animation from Sam Liu and his team is superior to last year’s Hulk Vs. effort but could have added a little more texture and detail to the various aliens and architecture. The Hulk looks pretty ferocious and proportional for a gladiator. There are some nice subtle touches, especially in the final scene.

Overall, this feature may well be the best of the Marvel films but all fairly pale in comparison with the superior Warner Premiere efforts culled from the DC Universe.

The two-disc DVD comes with a digital copy and a ton of bonuses. There’s an informative[[[A Whole World of Hulk]], making of featurette; Let the Smashing Commence! which gives Pak his due along with penciller Aaron Lopresti; commentary from Liu, character designer Philip Bourassa and key painter Steve Nicodemus. We’re also shown the opening to 2011’s [[[Tales of Asgard]]], which actually looks even better. The Wolverine segment from Hulk Vs. is repurposed along with the motion comics for [[[Spider-Woman]]] and Astonishing [[[X-Men]]] along with music videos and too many trailers.