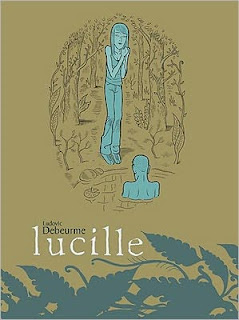 It’s not at all true that all unhappy families are different, no matter what famous writers may say — there are only so many kinds of unhappiness, and they recur again and again. And unhappy families breed unhappy people, who again fall into types — the sullen teenage boy, the cold and controlling mother, the quietly alcoholic father, the introverted anorexic daughter. They might not be part of the same family in any particular story, but we know these people when we see them — know them from fiction and from life.

to say that we know its characters already: the young lovers Lucille and Vladimir, and their very different but equally damaging parents. Debeurme tells their separate stories through mostly quiet scenes, made immediate by his large, open drawings and Lucille‘s lack of panel borders: each drawing flows into the next, as Lucille and Vladimir’s stories flow together eventually, as they meet and run away together, to get away from the landscape and people who made them what they are. (And, of course, in the hopes that doing so will let them escape the people they are.)

This is the story of two sad, damaged young people, who cling to each other in a world that’s not so much hostile as just unconcerned. They do find love with each other, as much as either of them can, and they even find a place where they might be happy. But can damaged people really be happy, even if they look to have their whole lives still to go? That’s the thorny question of Lucille: whether there is such a thing as a happy family, or any true lasting happiness anywhere in this world. Lucille and Vladimir’s journey is touching and inspiring and sad all at the same time; we desperately want them to transcend themselves at the same time that we’re sure that they can’t possibly do so.

I’m encouraged to learn that Lucille is not the end of the story; Debeurme has already created a sequel, Renee, which was published last year in his native France. So what seems to be an ending here might not be as final as it looks; there is always hope.