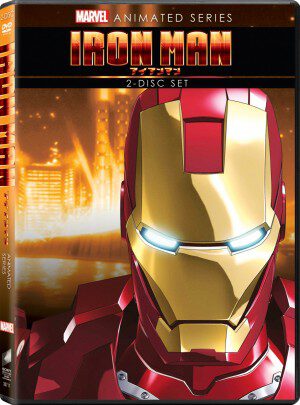 Marvel has been allowing the Japanese to adapt their characters for nearly 40 years now and the results have always been hit or miss. Thankfully, the most current offering is more successful than most. Back in 2009, Marvel announced it had cut a deal with Madhouse and Sony to let them produce four anime series based on Iron Man, X-Men, Wolverine, and Blade, which at the time were guaranteed film franchise successes. To Madhouse’s credit, they hired Warren Ellis to pen the scripts and help create an integrated, consisted Marvel Anime Universe.

The shows began airing in Japan on Animax in spring 2010 before finding a domestic home on G4 with the last new episodes airing earlier this month. Now, Sony Home Entertainment releases Iron Man and X-Men on DVD this Tuesday. Each two-disc set contains the complete twelve episode arc plus some extra features.

Madhouse, born in 1972, is known for Ninja Scroll and Vampire Hunter D among many other productions. Here, they hew close to the movie versions of the characters, making minor modifications to allow for animation. There’s a distinct anime look and feel to the civilians and a handful of the heroes, notably Storm. 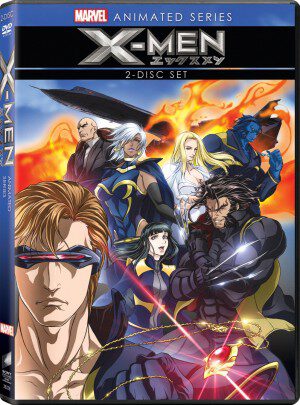 On one of the extras, Ellis talks about being able to write more adult themed stories for anime and that’s more evident in Iron Man than X-Men. And adult doesn’t mean sex or gratuitous violence (although there’s plenty of the latter) but it does involve globalization, the price one might pay for unlimited energy and a Western man’s adjustment to Eastern culture.

The Iron Man story posits Tony Stark coming to Japan to open a factory to mass produce Iron Man Dio armor for a trained army as he intends to retire. To power the Arc Factory, they need plutonium and that becomes the McGuffin for the tale. In addition to hacked armor going haywire the Golden Avenger confronts the Zodiac. Ho Yinsen, who helped build the first suit of armor, also plays a vital role. And Ellis includes a nice nod by naming a character Professor Michelinie.

Meantime, the X-Men deal with the death of Phoenix and head to Japan when the mutant Armor goes missing and is found under the tutelage of Emma Frost. Meantime, the U-Men are causing trouble that distracts the team, which finds itself acting out their grief. A further complication is “Damon-Hall Syndrome” which affects Japan’s mutants as they undergo their secondary mutation. It’s a limited lineup with Cyclops, Beast, Wolverine, Storm, and Prof. X on hand although other mutants are referenced or cameo (including Archangel, Colossus, Nightcrawler, and Rogue).

There are some casual crossovers between the four series including Iron Man being called on to help the mutants during their climactic final battle.  And while the X-Men prevail, there’s a teaser for a second season which appears not to be happening.

Overall, both series are better than you would expect and kudos to Ellis who worked up complex stories and themes. His characters sound and feel right while the anime style works better for Iron Man (with tons of integrated CGI) than the mutants. Still, these are quite watchable and worth your attention.

Interestingly, the discs come with the Japanese language preset so you need to switch to English. It’s also fun to listen to the English and read the subtitles to see where there are differences. It’s all subtle but interesting nonetheless. Among the domestic cast, which is actually better than most of Marvel’s offerings are Adrian Pasdar (Heroes) as Tony Stark, Scott Porter (The Good Wife) as Cyclops, and Milo Ventimiglia (Heroes) as Wolverine.

The Iron Man extras include Re-Imagining Iron Man, as Jeph Loeb, Ellis, and other execs talk about the making of the anime series; 21st Century Hero: The Technology of Iron Man introduces fans to Tony Stark’s high-tech suits and gadgets; Special Cross Talk round table discussion with the creators of the Iron Man and Wolverine anime series; and, Voicing Tony Stark, an interview with Japanese actor, Keiji Fujiwara.

The X-Men featurettes include Re-Examining The X-Men takes viewers behind-the-scenes; X-Men: A Team of Outsiders provides an exploration of Marvel’s mutants;  and, Special Talk Session round table discussion with the creators of Marvel anime’s X-Men and Blade.