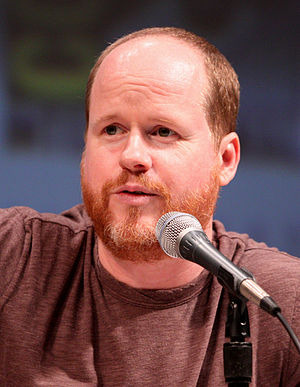 There’s a great interview with Joss Whedon, director of the upcoming The Avengers movie, out May 4th, in Sunday’s Arts & Leisure section of the New York Times.

Anyone who reads these columns with any regularity already knows that I am a Buffy geek. But you don’t know that I originally ignored it.  Yep, that’s right.  I didn’t find the Buffster until the second half of the second season, about the time Angel went back to being Angelus. I found her thanks to my participation in a message board called The Coffee Nebula, which started as a Voyager fan fest, but spread out into other science fiction — I can’t call it sci-fi — and fantasy shows, especially after Voyager ended. (The Neb, as we “Nebsters” fondly call it, is still active, so you might want to check it out.)  Everyone was raving about Buffy The Vampire Slayer, so I finally gave in checked it out.  And was hooked.

I searched out and found the episodes I had missed.  They weren’t quite as strong as the current episodes, but thinking about it now — and after reading the interview — I’ve figured something out.

“You get all these pieces, and it’s a puzzle,” Mr. Whedon says in the interview.  “But it’s a puzzle that comes together.” He was referring to working on established characters and histories rather than his own, original creations, but it’s also relevant to how Mr. Whedon — and other writers — develop their characters’ relationships.

Just as “real world” relationships take time to build, relationships in a fictional universe also need time to percolate. In the beginning, a description of the characters on Buffy could read:

This is how it always starts out.  Characters as roles.  Just a couple of quick jots on a piece of paper.

Then, as time goes by, just as in the real world, relationships develop, become more complex, cycling like a whirling dervish.  Secrets are revealed. Truths are disclosed. Promises are made and broken.  Lies are told.  Lies are forgiving.  Love happens, or it doesn’t, or it goes away. People learn whom they can depend on and whom they can’t.  In the fictional universe, just as in the real world, relationships ain’t easy.

And Whedon gets that. Which is, of course, something the Fox network never did.  They apparently wanted the success of Buffy — which took seven seasons to reach fruition, in the very first episodes of Firefly and Dollhouse.

I never read The Avengers when I was a little girl; back then I was a DC girl through and through.  As I think about it now, perhaps it was because I was not yet able to deal with the (adult) ebb and flow of relationships in that group.  I think I preferred the static “status quo” of Justice League (as it was back then) because it wasn’t so scary.  Everybody got along, or if they didn’t, their fights were of the schoolyard category, as in “you took my ball.”  Not threatening.

As I grew up and began to understand that life can be difficult, I started picking up The Avengers and letting the Justice League remain on the rack.  I wanted my heroes to be flawed.  I wanted them to make mistakes.  I loved that the relationships between Thor, Captain America, Iron Man, The Wasp, Ant-Man and all the others who have walked in and out of Avengers Manson went up and down and up and down and all around like the Coney Island roller coaster. That was life.  That was real life.

Yeah, it’s all about the group dynamics.