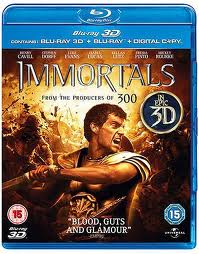 Considering director Tarsem Singh and screenwriters Vlas and Charley Parlapanides come from cultures steeped in mythology, you would think Immortals might have a touch of fidelity to the ancient source material. Instead, this incredibly generic looking film barely pays attention to even the most basic elements of the gods, goddesses, and creatures that interacted with man once upon a time. The film, out on home video now from 20th Century Home Entertainment, pays some lip-service to the stories once told to enthrall the masses and focuses on the handsome, well-oiled Theseus, our mortal hero. Played by the Man of Steel, Henry Cavill, he’s used to larger-than-life figures and gamely works his way through a bland script that pales in comparison with the best of Harryhausen and even the various myth-based films of the last few years.

The story in short involves the bad king Hyperion (Mickey Rourke), who wants to bring about the gods’ downfall by releasing their forbearers, the Titans, who languish in captivity within Mount Tartarus. His scheme begins by kidnapping the virgin oracle Phaedra (Frieda Pinto), so her powers can tell him how to bring his scheme to fruition. Along the way, Hyperion pillages a village, killing Theseus’ mother and dragging the peasant into the fray, setting him up to be the hero. While the gods come courtesy of Clash of the Titans, the film’s look owes royalties to 300 (which makes sense since it comes from the same producers without the vision of Zack Snyder) and Gladiator. 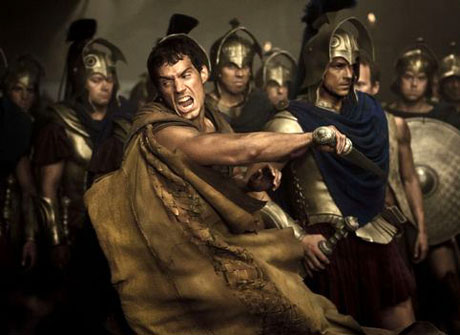 Interestingly, if you took Theseus out of the story, the outcome would remain largely the same making him a superfluous hero, not the stuff of Greek legend. The cast tries to make the most of weak material but it’s a struggle. What amazes me is that the gods — including Apollo (Corey Sevier), Athena (Isabel Lucas), Ares (Daniel Sharman), and Poseidon (Kellan Lutz) — with their petty jealousies and infighting makes for brilliant storytelling but is merely used to move the story along and give the special effects team something to do. The screenwriters missed a bet by focusing on the mortals.

Thankfully, when the gods strut their stuff the effects look good and the transfer to Blu-ray is amazing, clearly outshining the story being told. It sounds pretty fine, too. There’s a fine assortment of extras as well including It’s No Myth (5:27), an all-too-short piece with scholars of mythology discussing the source material; Caravaggio Meets Fight Club – Tarsem’s Vision (20:29), a four-part making-of that makes the film sound far better than it really is; Alternate Opening – Young Theseus (11:34), showing they had some sense; Alternate Ending – This is Our Last Embrace (8:38) and Alternate Ending – Theseus Kills Hyperion (4:07), two versions that aren’t any better; Deleted Scenes (8:10): eight not really missed moments; Immortals: Gods and Heroes, a digital comic that isn’t well handled.