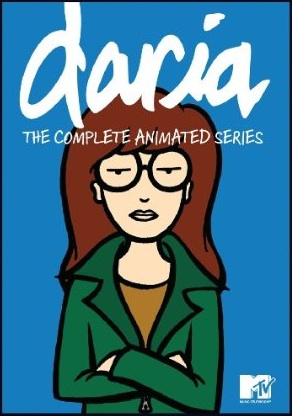 Released on May 11th, eight years after we’d
bid our
misanthropic heroine escapee from [[[Beavis & Butthead]]] and beloved
Lawndale adieu,
we have Daria: The Complete Animated Series

Well, almost complete. They did not get the rights to all
the
really cool songs that had once perfectly punctuated every episode – too
expensive and the main reason for the long delay. So what we have are
large
chunks of the series that have no musical background at all and parts
that have
some generic music inserted to fill the gaps – though they did include
all of Mystik Spiral’s songs, thankfully! So as I watched the five seasons
of
merriment and mayhem, yeah, I could not escape the feeling that
something was
missing, ‘cause it was. But don’t despair. [[[Daria]]], Janey, and the rest
of the
crew are there in all their cartoony glory, and that’s something to
raise an
amused eyebrow about.

The opening sequence, where Daria just stands there
and puts
one hand out during volleyball, sums up her character perfectly (only
shown
once per disk). So I tried to mainline this series multiple seasons in
one
sitting. Don’t try this at home, kids. The extended deadpan will kill
you.

I
found my limit to be a handful of episodes at a time. I still really
like this
show, and there are still some amazingly stand-out episodes, though I
think I
used to laugh at it more when it was one 25-minute ep per week. My favs
include 1st season’s #2 “Invitation,” #8 “Pinch Sitter” (down
with
super-PC parents!), #11 “Road Worrier” (Alternapalooza!), and the season
finale
#13 “Misery Chick” (for all you counselors out there), which contain
immortal
lines about getting the “bonus sock” after a misadventure at the cool
kids’
party, and their commentary on death, “It really makes you think.”

Season 3 is all about movie puns and spoofs, and #3
“Death
Takes a Holiday,” is “Dogma” on its own crack! Not a fan of the
ubiquitous
musical episodes in series, usually ‘cause the actors are lousy singers,
#7
“Daria!” had me rolling with comical character traits uber-exaggerated,
along
with their[[[X-Files]]] paean against paranoia, #11 “The Lawndale Files”.
There are
the inevitable growing up episodes – Daria gets a driver’s license and
the not-so-special episode where she and Tom don’t do it. Despite
negative
online chatter, I love Tom – he’s misanthropic, but he’s got a clarity
and gentleness that’s a great counterpoint to the babel and brutality
all
around him. Tom is the Greek Chorus to the Geek Chorus. And he helps
to put
the ever-present ethical and human dilemmas into perspective, giving
this
series a grounding that is at once mature and yet amusingly adolescent,
avoiding nihilism even when the show hits its moments of maximum
gravitas and
disaffection. We see ourselves and laugh, without recrimination.

Seasons 2 and 4 lag a bit, but still have their
moments, like
season 4’s #6 “I Loathe a Parade,” that looks at homecoming as only
Daria can.
And the series is very good at picking up threads from earlier seasons
and
continuing its dry-witty commentary. Season 5 has more serious eps than
any of
the other seasons, but they work in the context of approaching life’s
next
steps, with episodes 5 and 6 where Daria writes and Daria teaches
working
particularly well. And slacker Trent is always a highlight – or should I
say lowlight? – modeled after Jakob Dylan or Trent Reznor (no one
tells).

The packaging is nothing but the Daria. It’s
what’s on the
8 disks that counts: 5 seasons (’97-’02), 13 eps per season. This
includes
some great extras (disk 8), some of which are even funnier than the
episodes.
The pilot ep, “Sealed With a Kick,” in black-n-white, vibratey,
barely-animation,
includes a Daria rictus grin you’ll never see in the series. You also
get character
sketches, cast interviews, Mystik Spiral’s psychedelic video “Freakin’
Friends,” Daria Day Intros by Daria and Jane for scattered eps over the
first 4
seasons, Top Ten Animated Videos of All Time countdown hosted by Daria
and Jane
– who never tell you what #1 was! – and the script for the
never-made Mystik Spiral spin-off on CD-ROM. The 2 full-length movies,
“Is It
Fall Yet?” (after season 4) and “Is It College Yet” (series finale),
hold up
very well, though they are more serious than the series and yet still
true to
form and have their laugh-out-loud moments – the Go-Gos, surfer
movie-inspired opening to the first movie is full of visual jokes and
puns and
gets the sound dead-on. And the ending pictures and credits after each
episode
are priceless as they get more and more outrageous, these characters in
cosplay.

There is ample talent amongst the voice actors.
Wendy
Hoopes did triple duty for Jane, Helen, and Quinn, with distinction – I
mean, who can say Quinn’s name without hearing Helen’s throaty,
“Quh-WIN!”?
Marc Thompson, who voiced the eye-popping Mr. DeMartino, sensitive New
Age guy Mr.
O’Neill, brainless QB Kevie (his personal fav), and freaky Up-Chuck,
comes from
anime (Pokemon, Yu-Gi-Oh, One Piece), as does Julian Rebolledo for the
ever-hyper Jake (Pokemon). Tracy Grandstaff and Alvaro J. Gonzalez,
Daria and
Trent, respectively, are mainly from theatre, and their priceless
deliveries still
amuse.

This is a set well worth owning for fans of the
series or to
introduce new fans to the wisdom of Daria, despite some elements of
modified
rapture.