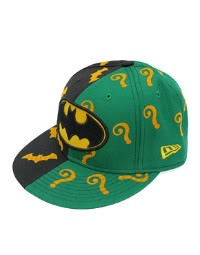 Back in the day, it was the cool thing to have a New Era cap of a sports team. I had one of the Chicago Bulls.

That trend has fallen off, though, and New Era is coming back by making an array of caps featuring not athletes but superheroes. The company previously had a deal with Marvel, but now they’re working with DC, as of this week.

Further evidence that comics is the "in" thing, I suppose.

Part of this latest comics push is connected to this weekend’s release of The Dark Knight, the new Batman movie. Over at New Era, they’re running a special promotion for the flick.

One can only wonder if people who jump on the superhero apparel bandwagon are also jumping into comics.