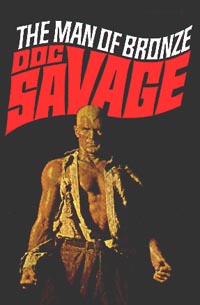 Whew, finally. After years of pleasant labor, I’ve gotten through all 182 original Doc Savage stories (counting THE RED SPIDER) and here we are with the very first novel, from the March 1933 issue. This started the saga of the pulp’s greatest adventure hero, which ran for sixteen years and (beginning in 1964) was eventually completely reprinted by Bantam Books.

The story itself is well enough known that I think we only need a brief summary. Clark Savage Senior has died of a mysterious ailment called the Red Death and his son Clark Jr (Doc) has returned to New York to summon his five best friends to both investigate the father’s death and to begin their lifelong crusade to travel the world, helping those in need and punishing those who deserve it. The six men end up in the Valley of the Vanished, in the Central American country of Hidalgo. Here a lost city of purebred Mayans still survives, guarding a legacy of an immense treasure of gold which Doc must earn to finance his life mission. During the course of the story, of course, there are plenty of spills and thrills, close calls and pitched battles, which will be Doc’s lifestyle until the last time we see him in 1949.

Lester Dent does a fine job setting up the series without making it seem crowded or awkward. His style is already distinctive, but it doesn’t have the occasional whacky touches which will give the series some of its screwball charm. At times, Dent gets a wee bit TOO purple, and his writing is choppier than it will become, with many! exclamation! points! and one-sentence paragraphs. Still, a totally enjoyable read and a great start (although I think Dent and Doc both hit their peak in 1934).

The Doc Savage series was worked out in meetings between Dent, editor John Nanovic and publisher Henry Ralston. It’s amazing how many details are here right in the first few pages that will continue until the end of the series. The appearance, personalties and mannerisms of all five aides are dead on target; Johnny doesn’t have his annoying habit of unreasonably obscure words yet, Monk and Ham are not as slapstick as they will become, yet all five are recognizable from the start.

Doc’s strange upbringing and wide range of skills, his trilling, the mysterious Fortress of Solitude, the daily two-hour exercises, the Mayan gold with King Chaac and Princess Monja on hand, the headquarters on the 86th floor of the Empire State Building… all are right here. Some important things will be added in the next year or so. Pat Savage, the Crime College, the code against killing and the mercy bullets, the Hidalgo Trading Company, Habeas Corpus. All these will enrich the series immensely, of course, but the first story gets underway fine without them.

There’s also the first of many masked super-villains, Kukulcan the Feathered Serpent. This is an outsider wearing a snake hood and outfit made from an actual boa constrictor (its tail dragging behind him) who gives the Mayan warrior sect their orders, and who is behind the hideous Red Death.

Let’s check out a few annotations for the record. Doc is introduced in a wonderful piece of writing. A lurking assassin in another skyscraper sees what looks like a masterful bust of a handsome man carved in hard bronze. Then, “the bronze masterpiece opened its mouth, yawned – for it was no statue but a living man!” We get the familiar mantra that “the big bronze man is so well put together that the impression was not of size, but of power.”

Doc is described as being six feet tall and weighing two hundred pounds (impressive enough for a guy in 1933). Yet this is immediately contradicted. Renny is said to be four inches over six feet tall, and when Doc stands next to him, he’s clearly taller and heavier. (“It was only then that one realized what a big man Doc was. Alongside Renny, Doc was like dynamite alongside gunpowder.”)

Ham is mentioned as having “a distinguished shock of prematurely grey hair.” (Will Murray used this and few ambiguous remarks in the series to describe Ham as white-haired.) In nearly every description, though, our fighting lawyer is said to have jet-black hair, “straight as an Indian’s” and I can only conclude that Theodore Marley Brooks is not above liberal use of dye to look younger. The shameless old rogue! It’s also stated that not only did Monk frame his pal for stealing hams back in the war, but he was court-martialed and convicted. I always thought Ham managed an acquittal and it’s odd to think an officer could be convicted of stealing Army property and retain his rank… maybe it was during a tough period in the war where his services were considered so needed that the charges were somehow dismissed?

Doc himself is much more relaxed and open with his feelings than the poker-faced stoic Mr Spock he will soon become. He grins, chuckles and tells his friends “Dry up, you gorillas!” then assigns Monk to join Ham since “You two love each other so.” The bronze man also has no compunction about taking life when necessary (“He did it – chopped a blow with the edge of his hand that snapped the Mayan’s neck instantly.”) Doc isn’t pulling his punches at this stage, and his fights leave as many enemy stone cold dead as they do stunned. (Ham also skewers a few foes with his sword cane, the anesthetic coating still in the future.)

And if you had reservations about the way the bronze man killed a polar bear with his bare hands in THE POLAR TREASURE, check this out:

“His left arm flipped with electric speed around the head of the thing, securing what a wrestler would call a stranglehold. Doc’s legs kicked powerfully. For a fractional moment he was able to lift the shark’s head out of the water. In that interval his free right fist found the one spot where his vast knowledge told him it was possible to stun the man-eater.”

Yes. Doc Savage punches out a shark. If it wasn’t right there on the page in black and white, I don’t know if I’d believe it either.

The bronze man has a remarkably fair-minded comment (for 1933) when his friends suggest that he owns the Valley legally and can just take it by force. “It’s a lousy trick for a government to take some poor savage’s land away from him and give it to a white man to exploit. Our own American Indians got that kind of a deal, you know.” (From Missouri, Lester Dent always showed respect and sympathy for Indians and almost always used individuals in his stories who were educated and shrewd.)

There is also a brief comment that gives support to those who like to think Doc retired after 1949 to go live in the Valley of the Vanished permanently with Princess Monja as his wife. “It was with genuine unwillingness that he had resolved to depart at once. This Valley of the Vanished was an idyllic spot in which to tarry. One could not desire more comforts than it offered.” He tells King Chaac, “I would like to remain here – always.” But his life’s work has just begun and we, who would otherwise have been slaughtered by all the monsters, masterminds and mad scientists Doc defeated, should be grateful he decided so.

I have always thought that Clark Savage Sr and his brother Alex brought back Mayan brides from their time in the valley, and this explained the distinctive bronze color of both Doc and Pat. (Growing up in Canada, Pat certainly wasn’t exposed to a “thousand tropical suns.”) If Doc was half-Mayan, it would explain why King Chaac would be so agreeable to supplying him with the tribe’s wealth and trusting him to defend the Mayans when needed.

And it’s a pleasant thought that, nearing fifty and finally wearying of his mission, Doc returned to his spiritual homeland to find Monja still there and still unattached; and that somewhere in the Valley of the Vanished, the bronze man died a natural death at an advanced age and is buried peacefully beside his princess.