Guest Review-SALMON VISITS THE WORLD OF ‘THE BLACK STILETTO’ 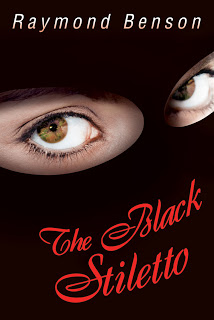 Raymond Benson’s The Black Stiletto (Oceanview Publishing) has a lot going for it but the sum is not quite equal to the parts that make up the novel.
The set up is an intriguing one. Judy Talbot is an elderly woman stricken with Alzheimer’s disease and slowing dying in a hospital. Her son, Martin, is given access to some of her personal effects as he awaits the inevitable end of the woman who raised him. Going through these papers he learns that his mother was a masked vigilante known as the Black Stiletto in the late 1950s and find diaries – the first of which relating her origin and early adventures.
The novel then branches off into three distinct storylines. We follow Martin as he uncovers his mother’s secret lair and costumes, reads the diary and gets bogged down in losing his job, hassles with his ex-wife and his own daughter who seems to have inherited her grandmother’s independent streak. Interspaced with this are the diary entries themselves as we see thirteen-year-old Judy suffer at the hands of her abusive stepfather, run away to New York and begin training as a fighter – picking up skills which will serve her well when the time comes to fight crime. The last storyline concerns the release of an ex-mobster who spent 50 years in prison courtesy of the Black Stiletto and is looking for a little payback in the modern day.
There’s a lot of material to work with here and most of it is interesting. However Martin’s job loss and trials with his daughter come across as needless padding. Judy’s story is where the book really shines although it is not without its shortcomings. There’s a heavy theme of chauvinism here and it’s a testament to her character that she is able to break down barriers, live and train in a all-male gymnasium and hold her head up in what was then a male-dominated world. She also gets a solid base of fight training which takes years and adds credibility to her decision to hit the streets and fight crime. She’s young and she stumbles out of the gate, falling for and eventually living with a mobster. When he is taken out, Judy is looking for revenge and the Black Stiletto is born. Media sensation, crime fighter hunted by the police, champion of the people… these elements are all present and the first person account of the birth of a costumed vigilante make for some interesting reading. When she tosses off a “courtesy of the Black Stiletto” you know the author is giving a nod to the Domino Lady.
It all sounds like fun stuff and, for the most part, it is, but the scenes from the 1950s rang utterly false to this reader. Aside from tossing in old song titles Judy hears constantly, the flashbacks read like modern day prose. I never felt like I was in the 50s reading these sections and that is a major failing of the book. Coupled with the padding I mentioned above and the novel, although short, begins to bog down. Also, as this is the first of a projected series, not a heck of a lot happens for the first 100 pages. This is no lean and mean pulp gripper but rather 266 meandering pages with occasional highlights.
Judy’s story is a compelling one. Watching the ruthless old ex-con drawing closer to a now helpless Black Stiletto in the modern day keeps you turning the pages. However a lack of pace and the author’s inability to capture the 50s authentically take away from what could have been a captivating take on the classic pulp hero.
I give The Black Stiletto a cautious recommendation as it pushes the New Pulp envelope. Hancock’s Yesteryear does it better but that doesn’t mean than Benson’s book shouldn’t find an audience. This reader found it an interesting read and others may find some of what I though detracted from the story riveting, which is why I recommend giving the novel a try. It’s no classic but it does come at the pulp hero from a different angle and there’s nothing wrong with that.
Share