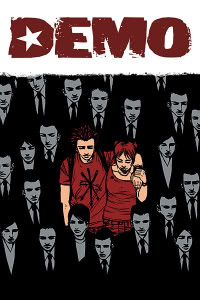 It seems every month that a new comic comes out purporting to offer a new, more realistic slant on superheroes. From Watchmen

, that idea has long been a popular one.

Except, none of those comics feel very real. Sure, they take elements from reality and offer a slightly more grounded or cynical look at heroes, but the stories within their pages don’t begin to evoke everyday life.

And this is why Demo

stands so far apart. The on-again, off-again series from writer Brian Wood and artist Becky Cloonan is finally concluded, and all 12 issues are now collected in a substantive new softcover (Vertigo, $19.99).

Begun in 2003 with a first issue featuring a girl struggling to handle her newfound telekinesis, the series was always about the people in the stories, not the abilities that set them apart. That first issue is rich with metaphor: the girl learns how to break away from home, become independent and not get in the way of her potential. Valuable lessons for anyone.

One of the strongest issues (#5), follows a girl who physically changes in appearance to match the desires of the people who see her. She could be a kooky X-Man, but Wood instead uses the strange ability to explore perception and desire, and the line between love and lust.

While the material is well worth reading on its own, one of the subtexts to watch is the continued development of Wood and Cloonan. You can trace their growth as creators along with the issues, and in the end the series is something entirely new again, not really touching on superpowers at all.

Cloonan’s work is exceptional, bouncing between styles from issue to issue. It’s hard to believe one person was responsible for such a disparate collection of art.

And while Demo features almost entirely young, hip characters — Wood’s bread and butter — he writes their interactions with as much grace as any writer in comics. There is a deep, haunting truth to these stories, so realistic it almost hurts.