REVIEW: The Amazing Chan and the Chan Clan 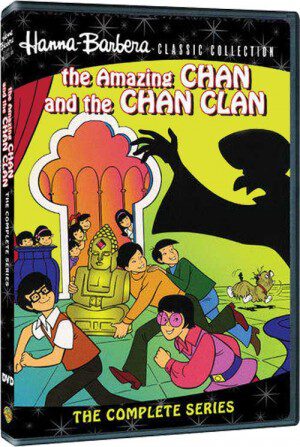 Prime time television in the 1950s and 1960s was packed with family situation comedies, including Hanna-Barbera’s takes on The Honeymooners in the form of The Flintstones and The Jetsons. By the dawn of the 1970s, those situation comedy tropes began to permeate Saturday morning cartoons as funny animal and super-heroic fare began to wane. Then there came Scooby-Doo, the first truly original and fresh concept in ages. The four meddlesome teens, their charismatic canine companion and van became the template for many imitators.

I can therefore imagine the brain trust at H-B trying to find new variations on the successful theme. The idea of combining elements a mystery solving family was a natural but how they ever settled on Charlie Chan and his dozen children remains an, ahem,. mystery.

The Amazing Chan and the Chan Clan debuted in 1972 on CBS and was derived from Earl Derr Biggers literary sleuth, Charlie Chan. Based on Honolulu, Chan was modeled on real life detective Apana Biggers, and was introduced in 1926 but gained greatest fame in a series films featuring occidental actor Warner Oland.

Interestingly, there had not been a Chan movie or television series for quite some time by 1972 so one wonders how familiar the youthful target audience was with the character when the series arrived. Regardless, the sixteen episodes showcased the kids a lot more than they did Mr. Chan and the show featured one of the larger casts of regular characters even if the prose Chan Clan was an even dozen, for this show they trimmed that to ten. In prose and television, the mother is never mentioned.

The stories themselves are filled with harmless action, some mild humor, and plenty of chances for the cast to shine. You can see for yourself in the newly released The Amazing Chan Clan and the Chan Clan — The Complete Series from Warner Archive. For the record, the series is credited for being the first time Charlie Chan was performed by a genuine Chinese actor, Keye Luke, who played Number One Son in many of the earlier features. Other performers were also of Asian descent but were quickly recast when CBS deemed their accents difficult for the audience to comprehend (although you wonder if they actually tested this theory and we won’t know because the original stories were redubbed). Only Robert Ito, as Henry, and Brian Trochi as genius inventor Alan, remained.

Each kid had a specialty in addition to a musical talent so they would perform a song in each episode, making for relatively simplified storytelling. The music was supervised by Don Kirshner (who else?) with vocals led by Ron Dante (carried over from The Archies). As for the cases, they mimicked the movies’ international flavor so Mr. Chan and the kids globetrotted after the Crown Jewels or visited Trinidad to find missing doubloons, or joining in for Mardi Gras in New Orleans. The cases were never the reason to watch the show, but instead to see the siblings interact and to find out what goofy new invention would come in handy. None of the songs ever made it to the Top 40 and are pretty forgettable.

If anything, this series is a curiosity from that transitional period between the Golden Age of Saturday morning fare and the watered down pabulum that denoted the ‘70s.