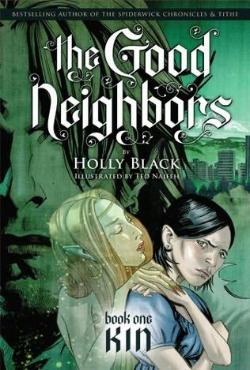 Holly Black made her name with [[[The Spiderwick Chronicles]]] and following that enormous hit, the pressure was no doubt on to follow it with something equally compelling.  Fortunately, [[[The Good Neighbors]]] may well be that second hit.

Once more, Black delves into the world of the supernatural, but rather than make up her own bestiary, she is inspired by the traditional world of the faerie. She also delves into a different set of family dynamics and clearly is using characters her readers can relate to.

Book One introduces us to Rue Silver just as her life begins to be irrevocably altered.  Rue is a high school student whose mother has gone missing and her father, a college professor, is accused of murdering her.  When one of his students is found dead, he’s arrested for both crimes.

Rue, though, has larger issues preoccupying her mind.  She’s seeing the world through new eyes so people suddenly have taken on different shapes, and nature seems to be responding to her presence. Her friends are sympathetic but uncertain how to react.  Then, she meets the ageless man who introduces himself as her grandfather and explains she has faerie blood and is ready for a new world.

Rue’s entry into this realm and her tortured emotions form the spine of the 117-story.  Black does a nice job with the characterization and I’m especially impressed with the circle of friends who support her.  They are individualistic and react in ways the readers can identify.  Friendship proves to be as important as family, as we discover.

The world we inhabit and the world of faerie, the book surmises, co-exist with strict rules and punishments.  There are consequences for people’s actions and Rue’s family is no exception.  She also learns she is not the only half-breed walking the planet, a valuable lesson that will no doubt carry through the trilogy.

Black is fortunate to have a consummate professional in Ted Naifeh to handle the artwork.  No stranger to the form, he has created a look and feel that allows us to begin believing that the things Rue is experiencing are real.  His black and white artwork is moody thanks to the gray tones he employs.  Rue and her pals look like today’s teens and the faerie are distinct although remind you of classic illustrations.

In supplemental material accompany the review copy from Scholastic, Black talked about the process of writing her first graphic novel and it was wise of her to keep cutting down on the dialogue, to allow the art help tell the story.  They form a fine partnership and as the first chapter comes to a close, there are enough intriguing threads and questions left unanswered to keep Scholastic’s eager readers waiting for the second volume, Kith, which should be out in 2009.

This is certainly an all ages read although Scholastic cautions 12 and up. Most certainly this is worth considering as you craft your gift giving lists.