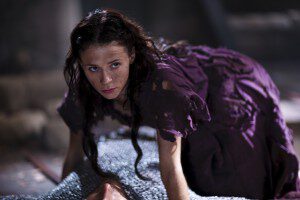 The shift to filming in glorious 35mm has opened new doors of creative storytelling for the crew of MERLIN, and the evidence is clear in the lush cinematography and haunting approach to “Lamia,” an all-new episode MERLIN premiering Friday, February 24, at 10 p.m. ET/PT only on Syfy.

The episode sets Merlin and several Knights of the Round Table on the road to a distant village to help treat those inflicted with a mysterious illness – but the young warlock quickly discovers he is the one in danger. As the Knights become increasingly bewitched by an alluring young woman named Lamia, Merlin finds himself with only Gwen as an ally as he’s lured into a game of cat and mouse against an unseen enemy more deadly than he could possibly imagine. 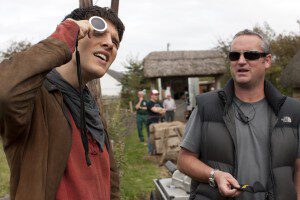 Lamia is played by actress Charlene McKenna, who is currently featured as the heroine of the popular Irish television series Raw. McKenna made her big screen debut in the award-winning Breakfast on Pluto, and followed that role with a breakout performance in the television series Pure Mule. She was honored as Outstanding Actress in a Mini-Series for her role in Whistleblower at the Monte Carlo Television Festival and, in 2009, she earned Best Actress/Television laurels for Raw at the Irish Film and Television Awards.

The episode “Lamia” is a strong example of the MERLIN crew’s enhanced filmmaking capabilities since shifting to 35mm for Season Four. Series co-creator and executive producer Johnny Capps explains that technology, combined with three years of experience on the series, has given the production team an opportunity to truly step up their game for the benefit of the viewers.

“The more fantasy stories you tell, the more confident you become in your storytelling and the way you make it – and the bigger the challenges you set before yourself,” Capps says. “Shooting on 35mm was a natural move for us because we’re able to make the CGI look a lot better, which is that kind of celluloid magic that allows you to make that fantasy world come to life that much better. 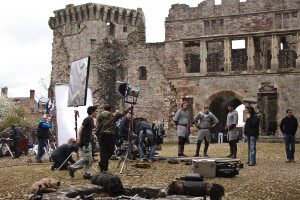 “I think it’s not that our budgets got bigger, but that you gain in confidence and you learn more and technology is constantly changing. So in Season One, we would never have a huge marching army – but in Season Three, we didn’t think anything of it, and in Season Four you’ll see thousands of people marching on Camelot. You become more confident and you grow with the technology.”

Capps adds that while the technology is better, that doesn’t mean the crew uses it just for the sake of having the technology – particularly when revealing the mystical, often-frightening monsters that inhabit the landscape of MERLIN. The “Lamia” episode is as entrancing for what viewers see as what they don’t see – a creature that mysteriously continues to waylay villagers and Knights with a paralyzing effect.

“The leap to 35mm has allowed us to be more ambitious in the creatures we create, but what’s interesting with creatures is that we really believe less is more” says Capps. “You don’t show the monster straight away – we’ve learned that it’s far more effective to use the Jaws effect. What we did in the first season was to show the monster jumping down on the ground, growling. Now you might see a glimpse of it and then we won’t reveal it until halfway through the episode. You learn about how to make it technically good, but also how to build the suspense. And ‘Lamia’ is a good example of that style.”

“Lamia,” an all-new episode of MERLIN, airs Friday, February 24 at 10 p.m. ET/PT only on Syfy.  All three seasons of MERLIN are now available on DVD and on iTunes.  Be sure to follow the latest news on MERLIN at the Official Merlin page on Facebook.