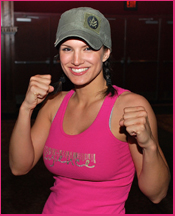 Well, you know that I wasn’t going to allow Haywire to escape from my local monsterplex without giving it a look. A guy who’s written about Lady Shiva and Black Canary, not to mention a somewhat wimpified Wonder Woman who used martial arts in lieu of genuine superpowers – this guy was about to let pass a movie starring one Gina Carano who, in addition to being gorgeous, has real-life ass-kicker credentials, a film directed by one of the most interesting gents in movieland? No siree!

For reasons that I suspect are exempt from rationality, I have always responded to movie swashbucklers who can actually do the stuff they’re pretending to do – in the case of the excellent Jackie Chan, actually doing it for the camera. So, either in theaters or in my domicile, I’ve watched flicks starring Jackie, Bruce Lee, and, descending to the region of lesser lights, Cynthia Rockrock, Olivier Gruner, Jean Claude Van Damme, Don Wilson, Steven Seagal and maybe one or two I’ve forgotten.

Not everything featuring these performers was a cinematic masterpiece, but I watched and, dammit, I will continue to watch, at least as long as Blockbuster is willing to rent me discs.

The conflation of fiction and biography isn’t new – far from it. Davy Crockett and Wild Bill Hickok were featured in the pulpy dime novels of the 19th century in yarns that may have been…just a tad exaggerated, maybe. Hickok starred in a stage drama about a frontiersman who may have had more than a passing resemblance to Wild Bill himself before dying of a gunshot while playing poker, and Buffalo Bill Cody, animal hunter turned showman, had a vastly successful “wild west show” with cowboys and Indians and stage coaches and lots of horses. (Even a cow or two?)

Going way, way back – even Alexander the Great was pulpified in extravagant adventures written about someone with his name and general background who didn’t otherwise resemble the great conqueror. (My source doesn’t specify how these stories were disseminated: read aloud down at the agora while the hearties knocked back the fermented honey or whatever was in the barrel in far-past days of yore?)

So what’s the appeal of these mashups of fable and fact? I offer two possible reasons.

First reason: In the cases of Chan, Lee, et. al., it might be a twin to the pleasure we get from watching dance because dance is what a well-choreographed movie fight is. (And I do wish that Hollywood folk would become aware of this.) The human body doing the extraordinary – the reason we watch the Olympics and a lot of televised sports.

And the second reason: we need heroes and maybe knowing that there’s something authentic in screen portrayals helps, just a tiny bit, in our willing suspension of disbelief.

Haywire? Oh yeah, Haywire, with Gina Carano. Did I mention that it was directed by the protean Steven Soderbergh and that I thought it was pretty good?