MIKE GOLD: The Curious Case of The Ghost Rider 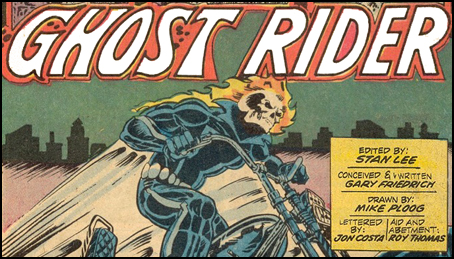 Last week, the Internets were all aflutter with the story about how Disney/Marvel successfully defended itself against Gary Friedrich’s Ghost Rider lawsuit. This was hardly surprising. Just ask Marv Wolfman or the ghost of Steve Gerber.

Then Disney/Marvel turned around and demanded $17,000 from Gary for the Ghost Rider prints he sold at comic book conventions – you know, just like hundreds of other artists do at every artists’ alley at nearly every comic book convention held in the past decade. This was very surprising. And quite disgusting. Not to mention overwhelmingly petty.

Well, those of us who followed Disney’s Air Pirates lawsuit weren’t surprised at all, but that’s another story.

When Gary filed his appeal and the noise went into the can for a while, I whipped out Marvel Spotlight #5.  On that very first Ghost Rider story, the credits read “conceived and written by Gary Friedrich.” (Emphasis mine.) That was unique for comics at that time. The lawyers discouraged publishers for printing creator credits lest said creators pull what is affectionately known as a “Siegel/Shuster.” I remember being a bit surprised – perhaps impressed is the better word for it – back when I read that issue back in 1972. Nonetheless, Gary lost his case.

This wasn’t the only thing that surprised me. I was also surprised that Marvel plowed over the name of their western hero, first and last seen in his own seven-issue series back in 1967. It was a clever use of recycling intellectual property.

I remembered that Ghost Rider rather fondly. It was a good, solid macabre western character told in then-contemporary Marvel style featuring some of Dick Ayers’ best art in years. So I whipped out Ghost Rider #1, cover-dated February 1967. And then I took a look at the credits. 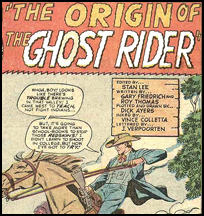 Please note that both Ghost Rider origins were edited by the same person, a guy named Stan Lee. And Roy Thomas was involved in both – as co-dialogist on the western, and as “aider and abettor” on the motorcyclist. And Gary Friedrich was a writer on both.

That didn’t give Gary any legal coverage, but it’s an interesting chain-of-evidence. Core to the issue of who owns what – in a moral sense but not legal – is the derivation of the original Ghost Rider. The first one. The one before the two published by Marvel Comics.

The one that was damn near exactly the same as Marvel’s western, right down to Dick Ayers’ artwork and design. The one that was published by Magazine Enterprises in various of their titles, including one called “Ghost Rider.” That one lasted twice as long as Marvel’s. The feature got its start in their Tim Holt title. This original version was, as noted, drawn by Dick Ayers and written – some say created – by editor Raymond Krank, who later replaced himself with Gardner Fox. Many of those Tim Holt covers were drawn by Frank Frazetta, who also illustrated a Ghost Rider text story.

This wasn’t the first time Marvel assumed the name of a character they did not create, as geriatric Daredevil fans know all too well. But that, too, is another story.

Ghost Rider has had an interesting history, one that isn’t over. It’s a good example of how the whole comics creation thing is a can of worms. Jerry Siegel and Joe Shuster created Superman and Clark Kent and Lois Lane, but they did not create Perry White, Jimmy Olsen, and Kryptonite, among a great, great many other vital Superman concepts. If their estates wind up owning Superman, what happens to Perry and Jimmy and the rest?

Good grief. Back in the day, nobody was supposed to take all this seriously. But I think I know how either version of the Ghost Rider would have handled it.

Screw the lawyers. We’ve got us our six-guns, and one mother of a bike.